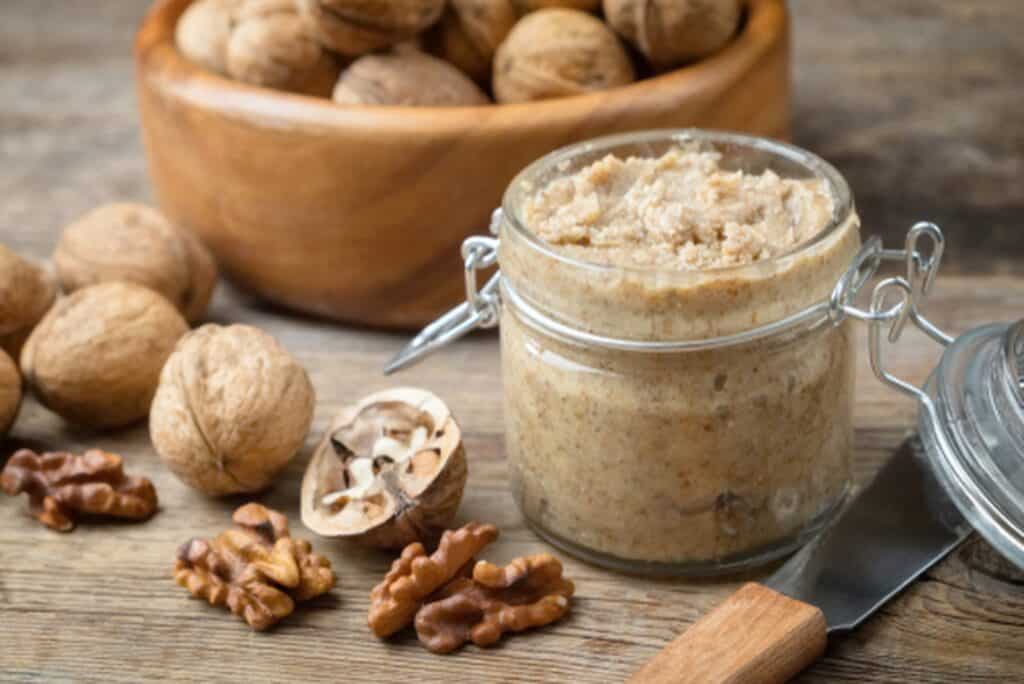 Walnut butter is made with ground walnuts. Walnuts are full of oil, and grinding them causes the release of that oil, which helps convert the ground nuts to a spreadable paste. Walnuts originated in Persia, which is called Iran today. From Persia, they spread throughout Asia and Europe. As one of the oldest tree foods, walnuts were highly valued by the Ancient Greeks and the Ancient Romans. Pliny the Elder considered walnut trees poisonous.

In the 8th century, Charlemagne the Great planted walnuts in his orchards. It is believed that the practice of using nuts and nut pastes in dishes was taken from the Arabs and made its way to Europe as a result of the crusades, which began around 1095. Walnut was one of the popular nuts for use in cooking fish and meats. One of the earliest English recipes includes walnuts being ground in a mortar and used as a stuffing for fish.

While there is no clear documentation indicating precisely when the current form of walnut butter was invented or by whom, there is evidence indicating that it has been around at least since the beginning of the 20th century. It is mentioned in the Journal of the Royal Horticultural Society in 1907. This would have been around the time that early health food influencer John Harvey Kellogg (of cornflakes fame) was popularizing peanut butter and other nut butters.

Walnut butter consists mainly of walnuts, which means that it will have a strong and nutty flavor profile. It will also be mildly bitter. Walnut butter tends to be among the richest-tasting nut butters; it is richer than peanut butter and almond butter. As with butter made from other nuts, walnut butter can be processed to have a smooth or chunky consistency.

Because walnuts are particularly nutritious, walnut butter is also loaded with compounds that are beneficial for health. Those compounds include:

By consuming walnut butter, you may be able to treat or prevent health problems like:

You can use walnut butter the same ways you would use other nut butters, including peanut and almond butters. Spread it on bread, biscuits, and crackers. Use it as a topping for pancakes and waffles; stir it into oatmeal or smoothies. Add it to cookie dough and cake batter for its flavor and high healthy fat content.