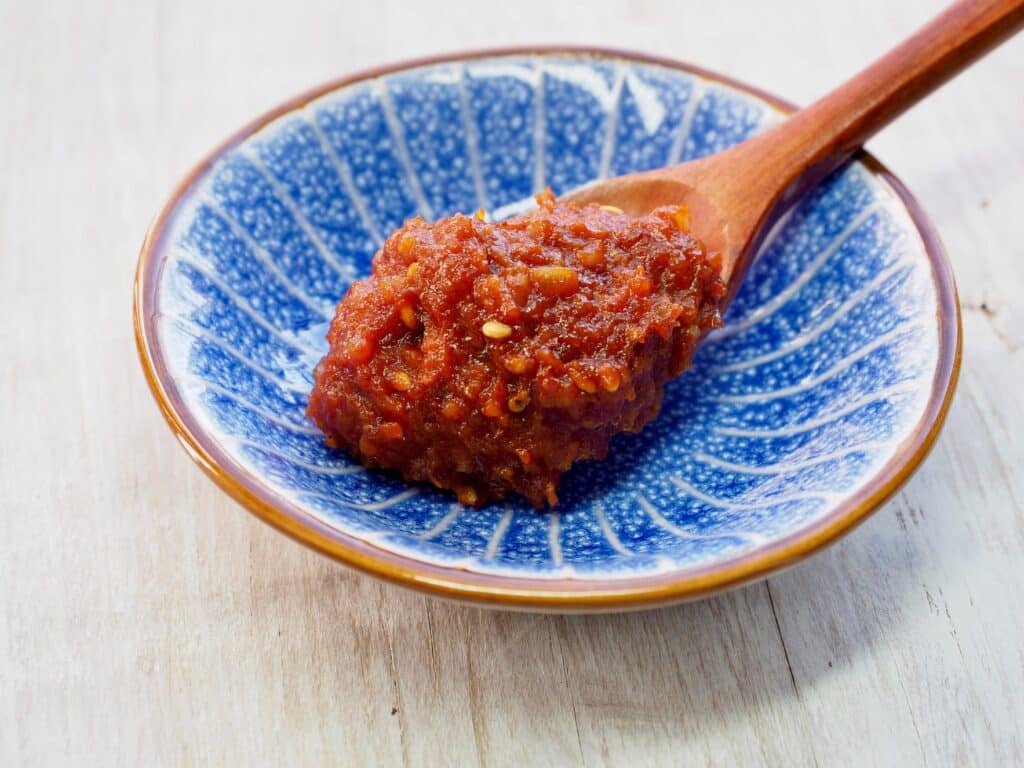 Ssamjang is a Korean seasoning sauce. The most basic version of ssamjang is a blend of doenjang and gochujang, two seasoning pastes that have been around for centuries. Doenjang is a fermented soybean paste and gochujang is chili pepper paste with sugar and fermented soybeans for flavor. Ssamjang was invented by the CJ CheilJedang food company and marketed under its traditional Korean food brand Haechandle in 1983. The Haechandle brand has been around for 45 years.

The chili peppers used to make gochujang and ssamjang are believed to have arrived in Korea via the Columbian Exchange in the 1500s. Soybeans have been used in Korea for at least 2,000 years.

Ssamjang recipes vary according to the maker’s preferences. The traditional version has sesame oil and sesame seeds along with doenjang and gochujang. Other variations can include flavorful additions like dried shrimp, garlic, and onion. The traditional ingredients combine to offer earthiness and nuttiness from garlic and sesame oil accompanied by saltiness, spicy heat and umami from the doenjang and gochujang. There will also be a little sweetness that comes from the gochujang and some versions may also contain yoridang, a Korean cooking syrup. The sweetness helps blend all the other flavors.

Even though ssamjang does come with some major health concerns, you can get nutrients from it because its main components are nutritious. The nutrients in ssamjang include:

With ssamjang in your diet, your body may be equipped to overcome or forestall health problems like:

Both doenjang and gochujang contain high levels of salt. Excessive salt intake is associated with a range of serious health problems that come from its tendency to raise blood pressure. High blood pressure is associated with an increased risk of heart disease and stroke. Gochujang also contains a significant amount of sugar, and too much of that can increase your risk of type 2 diabetes and may contribute to obesity.

The most common way to use ssamjang is in ssam, a popular street food. The word ssam translates to wrapped and refers to the fact that the dish consists of food wrapped in a leaf. The food can be grilled meat with kimchi and/or rice and the leaf is typically lettuce, a steamed cabbage leaf or a perilla leaf. Ssamjang is believed to be the perfect complement for the Korean grilled pork belly dish called samgyeopsal.

Aside from its traditional applications, ssamjang makes an excellent marinade ingredient and can even work as a table condiment for some Western dishes. Use it as a dipping sauce for chicken nuggets or blend it into a vinaigrette.