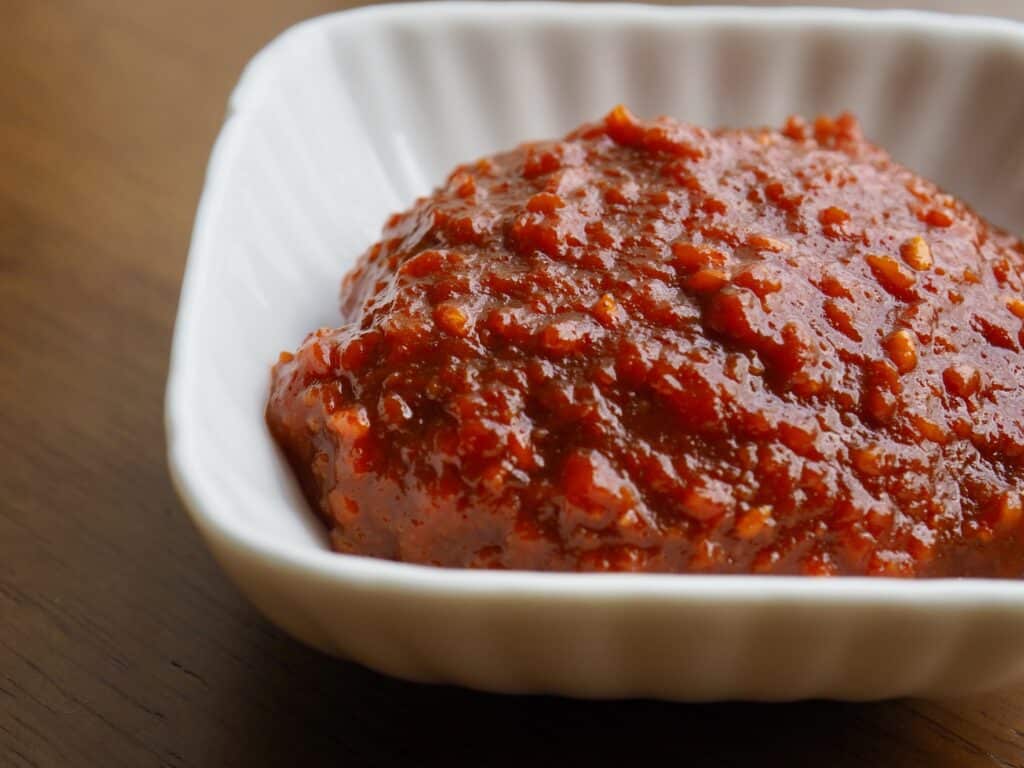 Ssamjang and doenjang are two seasonings that you should keep in your kitchen if you plan to cook a lot of Korean food. They bring some of the same qualities to dishes, along with a few that are unique to each. Learn more about how ssamjang and doenjang compare to each other in the SPICEography Showdown below.

How does ssamjang differ from doenjang?

Ssamjang and doenjang have different origin stories. Ssamjang is a relatively recent invention. It was first made back in the 1980s. Doenjang’s history goes back much further. Doenjang is inseparable from the earliest fermentation of soybean in Korea’s history. Some sources claim that Koreans have been fermenting soybeans for more than 2,000 years. The fermentation of soybean likely began as a way to preserve it and offered the added benefit of making it easier to digest and more nutritious.

The recipes for ssamjang and doenjang are different, Ssamjang consists of doenjang plus the chili sauce known as gochujang. There will also be a few other ingredients like sesame oil for added complexity. Doenjang is simply a fermented soybean paste consisting of soybeans and salt.

Because the gochujang used to make it can range from mild to hot, ssamjang similarly offers a variety of heat levels. Gochujang is also somewhat sweet, which is a property that it will bring to ssamjang. In comparison, doenjang offers saltiness and complex umami from the fermented soy, but no heat or sweetness.

Ssamjang’s appearance can vary somewhat from brand to brand, but the traditional color is somewhere between burgundy and brown. Doenjang’s color is typically just a medium brown, but it gets darker the longer it ferments, so it can be dark brown if it has been aged for a long time.

Because it contains some doenjang, ssamjang has some of its flavor notes, so it can be an effective doenjang substitute in some cases. If your dish needs the pure doenjang flavor, ssamjang won’t be perfect since it will bring the sweetness and heat of gochujang; however, those additional flavors may be beneficial for a new twist on some recipes. If you are making a dipping sauce, it can certainly offer a brighter flavor that will enhance your food. On the other hand, ssamjang might not be an ideal doenjang replacement if you are making a traditional Korean soup or stew.

Doenjang with nothing added to it can be a good ssamjang replacement if you want to tone down a dish’s heat and sweetness. Otherwise, you can use it to make ssamjang from scratch if you have some gochujang or a gochujang substitute on hand.

The best way to use ssamjang is in the dish for which it was created: ssam. Ssamjang is the traditional sauce for the wraps made with lettuce, steamed cabbage leaves or perilla leaves. It is versatile enough to be used as a condiment for other vegetables and as a marinade ingredient for barbecued meats, including those cooked using Western methods.

Doenjang’s primary application is in traditional Korean dishes like doenjang jjigae where its intense umami can stand at the forefront of the flavor profile. It can also work in any dish that would otherwise use miso or soy sauce. Combine it with gochujang to make ssamjang or the pork marinated with doenjang that is called maekjeok.