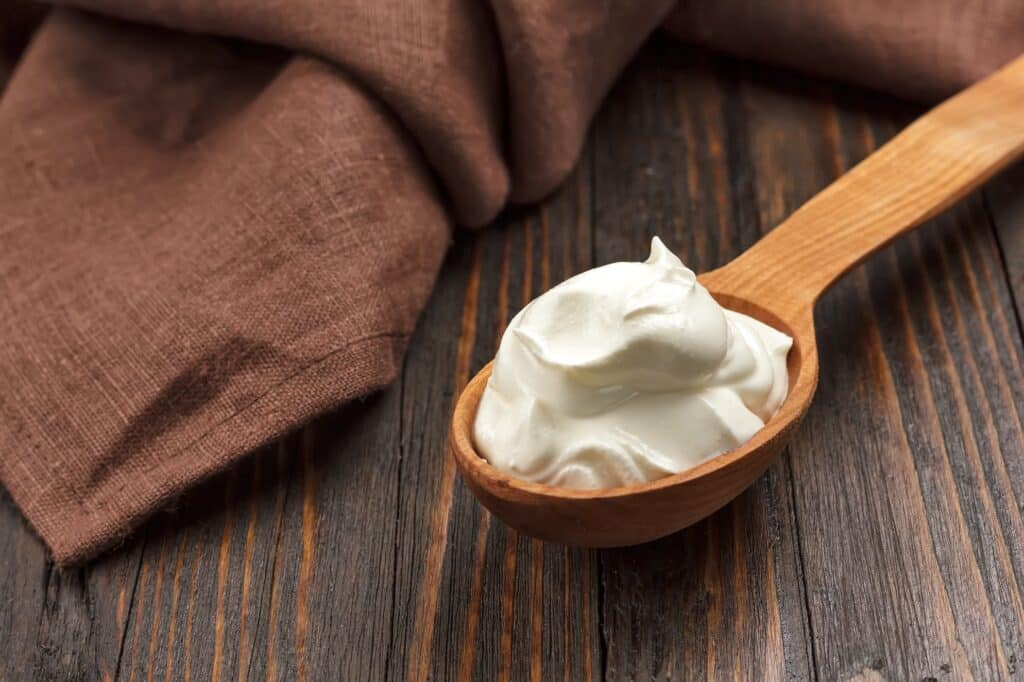 Sour cream and crème fraiche are two cultured dairy products. They can be interchangeable in some instances but not in all. To learn more about how they are similar and how they differ, see the SPICEography Showdown below.

How does sour cream differ from crème fraiche?

Sour cream and crème fraiche differ in their composition. Sour cream has considerably less fat than crème fraiche but more protein. The US Food and Drug Administration requires sour cream to have 18 percent fat at a minimum while US crème fraiche will typically contain 30 percent or more. Crème fraiche has more vitamin A than sour cream but less calcium. Sour cream may also contain gelatin and other thickeners; crème fraiche gets its thickness from the bacteria used to ferment it.

Whether you can use sour cream to replace crème fraiche depends on what you want from the dish. Both will provide tangy flavor and creaminess but to differing extents. Sour cream is an excellent crème fraiche substitute if you want to cut calories and get a tangier taste. It might not work for all crème fraiche applications including those where it has to be used as a spread or dessert topping.

You can use crème fraiche as a sour cream substitute in most recipes, but it won’t be ideal in all of them. Crème fraiche works best as a substitute for sour cream if the dish doesn’t need sour cream’s strong sourness or would be better with a richer and more buttery flavor.

Use sour cream if you are calorie-conscious or want the sour flavor to be emphasized in your dish. Because of the strong tang, sour cream usually gets recommended for savory dishes. Use it as a topping for baked potatoes and chili. Use crème fraiche if you are concerned that the cream might curdle because of heat or acidity. Crème fraiche is also best when you want creaminess with only a hint of sourness. This is important when making scrambled eggs or if you need a topping for fruit.