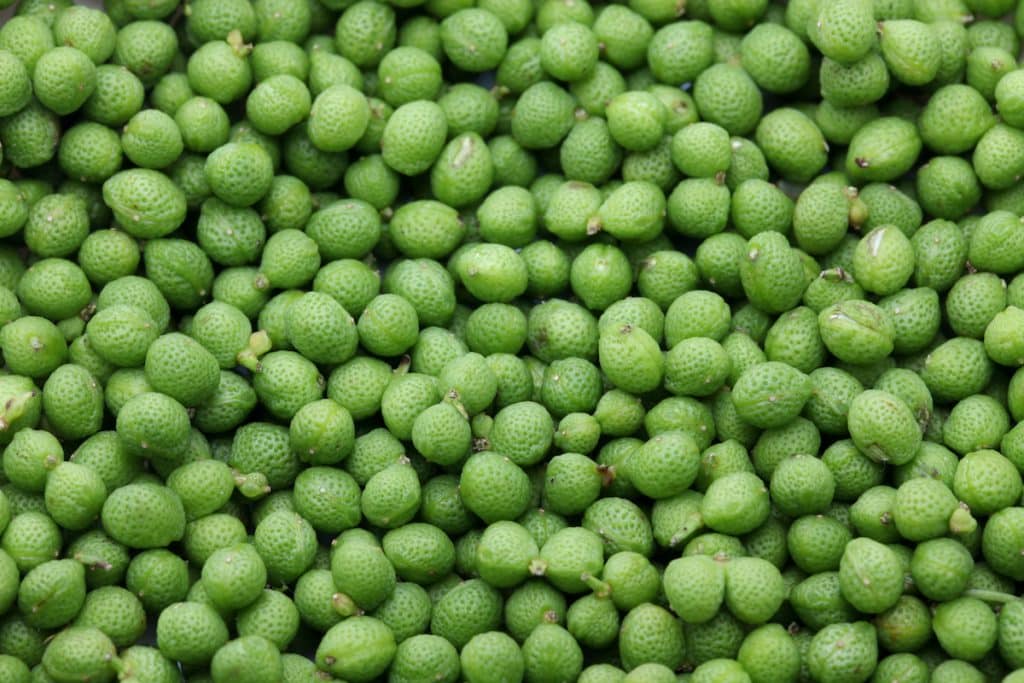 Sansho pepper is native to Japan and the Japanese have been using it since the Jomon period. Clay bowls from that era have been discovered in recent times still containing sansho. The Jomon period is said to go as far back as 1000 BCE. Some sources claim that the spice has been used for even longer, stating that the spice was being used in 12,500 BCE but this has been refuted.

Sansho pepper is harvested from a plant called the prickly ash that is closely related to the plant from which Szechuan pepper comes. While many online resources claim that these two spices are one and the same, they are not. In both cases, only the outer husks of the seeds are used. The husks are ground and the inner seeds discarded. Like Szechuan pepper, sansho pepper is not related to black pepper at all despite having the word pepper in the name. Both are related to citrus plants.

During the Nara era (710 to 794 AD), sansho pepper went by the name naruhajika. It would be used as medicine for treating diarrhea during the subsequent Heian era (794 to 1185 AD). It was still in use during the later Kamakura era (1185 to 1333 AD) when there is evidence that the samurai used the spice when hunting. The use of sansho pepper for unagi, a type of freshwater eel began during this era.

Today, most of the world’s sansho production is based in Japan, in the Wakayama Prefecture. Budo sansho is a variety of the spice that Wakayama is famous for producing. One distinguishing characteristic of this sansho is that it grows in bunches like grapes.

The flavor of sansho pepper is similar to that of its relative, Szechuan pepper. The primary note is peppery heat followed by a slight numbing quality. There is also a hint of citrus in the fragrance; the citrus aspect is stronger than it is in Szechuan pepper. It is worth noting that the heat of sansho pepper is considerably milder than capsicum peppers when measured on the Scoville scale.

Sansho pepper is full of important compounds for maintaining and improving health; these include:

The nutrients in sansho pepper make it valuable for addressing quite a few health issues, including:

The citrus and peppery notes of sansho pepper are great for cutting through fatty meats. In Japan, sansho pepper has long been the traditional spice for unagi. Unagi is a particularly fatty fish and is usually served grilled. Sansho pepper is also used to season yakitori. Sansho shows up in one of the most popular Japanese spice blends: shichimi togarashi. It is used in nanami togarashi as well. It can be applied in western dishes in much the same way that you would use black pepper. Use it on grilled steak or as a part of a barbecue rub.

1 thought on “Sansho Pepper: The Japanese Version Of Szechuan Pepper”