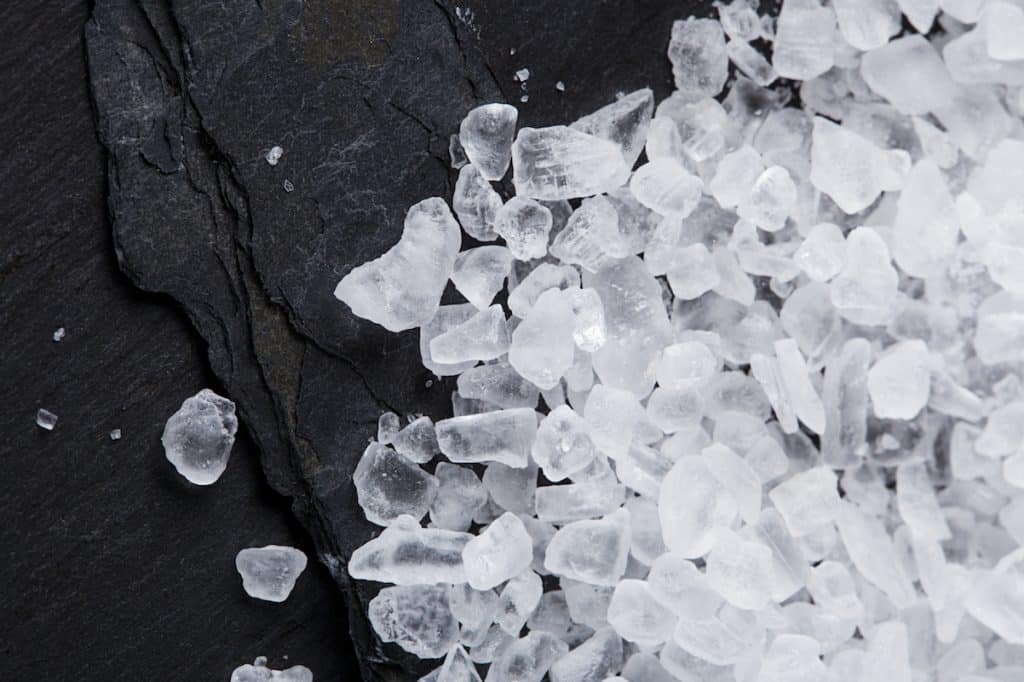 Rock salt and table salt are two salt varieties with culinary applications, though rock salt is often known more for its use outside the kitchen. Both varieties come with striking differences and each comes with their own sets of benefits and drawbacks. If you are trying to decide which one to use for a particular application, consider the rock salt vs table salt comparison below in another SPICEography Showdown.

How do rock salt and table salt differ?

Rock salt and table salt are both salts in that they both consist mostly of sodium chloride. Because they are composed of the same chemical, rock salt and table salt provide the same flavor; however, there are quite a few differences beyond that. For starters, there is the matter of grain-size. The most obvious difference between the two is that rock salt consists of larger grains than table salt, which is usually finely ground. The results in some limitations in how it can be used and some benefits as well.

Another issue is the matter of additives. While table salt consists almost entirely of sodium chloride, there are other components. One of those components is iodine. Iodine is an element that is included as a way to prevent iodine deficiency. In addition to iodine, table salt may contain anti-caking agents to keep the crystals from sticking together. Because of these additives, table salt is said by some to have a mildly bitter flavor that is detectable to people with very finely tuned taste buds. Food grade rock salt will contain no additives, which means that its composition and taste are more similar to those of kosher salt.

Can you use one to replace the other?

The main drawback of rock salt is that it consists of large crystals. The size of the crystals means that rock salt cannot be used as a finishing salt since the crystals take too long to dissolve. They are not flaky like sea salt. That said, you can grind rock salt to a finer consistency using a spice grinder or mortar and pestle. You can use ground rock salt just as you would table salt. You can also use rock salt in dishes where the salt will dissolve in liquids. For example, you can use it when boiling or braising. In these dishes, rock salt will dissolve in liquids just like any other salt.

One of the main culinary uses of rock salt is in making ice cream. It is used to lower the freezing point of water, thus allowing it to get the temperature of the cream lower than would be possible with ice alone. While this can be done with table salt, the fine granules make it more difficult as they may not be distributed evenly in the ice. Cost can also make a difference as rock salt is much cheaper than table salt.

As noted above, rock salt crystals are large and chunky. They are best used in dishes where these qualities are either desirable or where they will not make a difference. For example, you can use rock salt in the aforementioned ice cream or for boiling pasta. You can also grind it finely and use it exactly as you would table salt, or grind it coarsely to replace kosher salt.

Table salt is the true all-purpose seasoning. Its fine grains make it perfect for seasoning liquids at the last minute as it will dissolve rapidly.