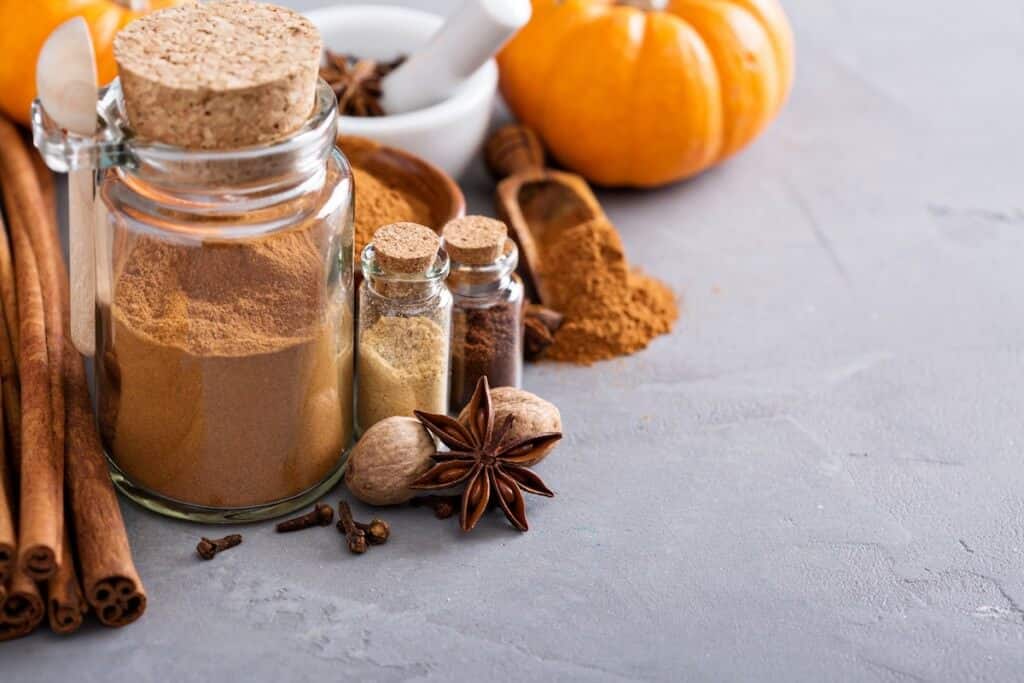 Pumpkin pie spice is a seasonal mix of spices that tends to show up in recipes and on menus around fall. In fact, it is intended to evoke the taste of fall. Pumpkin pie spice started with the pumpkin and the early European immigrants in America. The pumpkin was a New World crop and the first European Americans had little choice but to acquire a taste for it. Early methods involved cooking it with a selection of spices, apples, and sugar.

The first documented use of the spices in pumpkin pie spice date back to Amelia Simmons’s American Cookery from 1796. In it, she used allspice and ginger to flavor a pumpkin. At this point, the combination of spices was not yet called “pumpkin spice.”

The appellation for the blend would not come about until 1936 when it was used in a recipe for pumpkin spice cakes published in the Washington Post. In the 1950s, spice companies started selling spice mixes called pumpkin pie spice. These mixes were pre-blended for convenience and contained the spices we now associate with pumpkin such as cinnamon, allspice, and so on. These blends are still in use today.

To get a better idea of the pumpkin pie spice flavor, it is important to look at the constituent spices. One of the main elements is allspice, which provides a pungent and sweet aroma reminiscent of cloves and cinnamon. Nutmeg provides a nutty and sweet element but with less of a bite than cinnamon.

Most blends also contain ginger, which provides a peppery and lemony edge. There is also cinnamon, which delivers a strong and intensely aromatic touch and which handles baking well. A pumpkin pie spice mix also has to include cloves. Cloves offer a flavor that is often described as warm, sweet and spicy. It is usually the most easily discerned spice in pumpkin pie spice blends.

The spices above are contained in most pumpkin pie spice mixes but some also include additional ingredients such as cardamom and orange peel.

The individual spices used to make pumpkin pie spice all contain substances beneficial for health including various vitamins and minerals. For example, a single teaspoon of pumpkin pie spice contains 12 percent of the recommended daily intake of manganese. This mineral is necessary for cellular metabolism.

From the cinnamon, you get cinnamaldehyde. Cinnamaldehyde has anti-cancer and antibacterial benefits. There is also evidence that cinnamaldehyde can help to prevent diabetes by improving insulin sensitivity and glucose tolerance.

Nutmeg has antifungal properties in addition to being a digestive aid. Ginger is also an effective digestive aid in its own right and can be used to treat nausea and motion sickness. Ginger also fights inflammation and has antioxidant benefits. Clove is the third digestive aid in the mix and it also works as an expectorant. Similar to cinnamon, allspice has antibacterial and antioxidant properties but it also has anesthetic properties to go along with them.