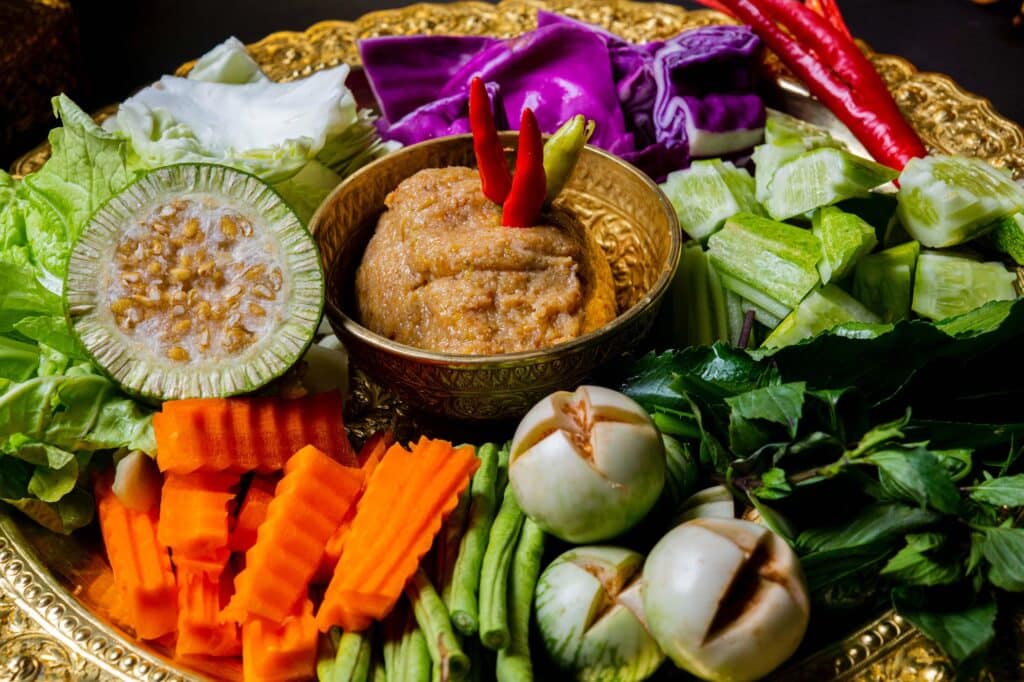 Prahok is a Cambodian staple. It is a paste typically made from the freshwater fish called trey riel. The fish has the same name as Cambodia’s currency, which is the Riel. The fish’s English name is mud carp. Records show that for much of its history, fresh and saltwater fish have been harvested in the region that would go on to become Cambodia. There is archeological evidence that fish were being caught in the Mekong River and other areas as early as 100 BCE. About 10 percent of the fish caught in Cambodia every year gets turned into prahok.

Prahok was originally a way to preserve fish during Cambodia’s dry season. For many of the country’s poorest residents, this preserved fish was a major (or only) source of protein.

The traditional way to make prahok is to crush the fish underfoot. These days, the process is done mostly with machines that chop and blend the fish instead of the old foot method.

The fish is salted and fermented in baskets. The liquid that runs off from the fermenting fish is used as a kind of fish sauce. The fish is then dried and salted again before being placed in containers for a longer period. It can take up to two years to ferment prahok.

In recent years, prahok has become more expensive. Prahok is now beyond the reach of many Cambodians. The rising cost is partly due to the effects of global warming, which has affected the numbers of fish.

Prahok is known for its intensely pungent fish flavor. The flavor is especially potent to foreigners who tend to compare the fermented taste to the taste of super-fragrant cheeses. This is one of those food items that will appeal only to the most adventurous Western eaters. Cambodian restaurateurs are known to limit the amount of prahok used in dishes that they serve to foreigners because of its intensity.

The impressive array of nutritional benefits that prahok provides is the result of compounds like:

With prahok as a part of your diet, you may be able to treat or prevent health problems like:

Salt is used to preserve prahok, so it contains a lot of it. A serving can provide a significant portion of your daily recommended allowance of sodium. Too much salt can negatively affect blood pressure and cause a variety of other health issues.

Prahok is primarily a dipping sauce but is often used as an ingredient. It is one of the primary seasonings in most Khmer dishes. In some cases, prahok may be served by itself as a dish rather than as a condiment. Prahok is an important ingredient in the classic Khmer soup called samlar kakou, which is sometimes written as samlor kako or samlar kako. The soup features an assortment of greens including mustard greens and spinach. Prahok ktis is a ground pork dish that features prahok along with coconut milk and lemongrass.