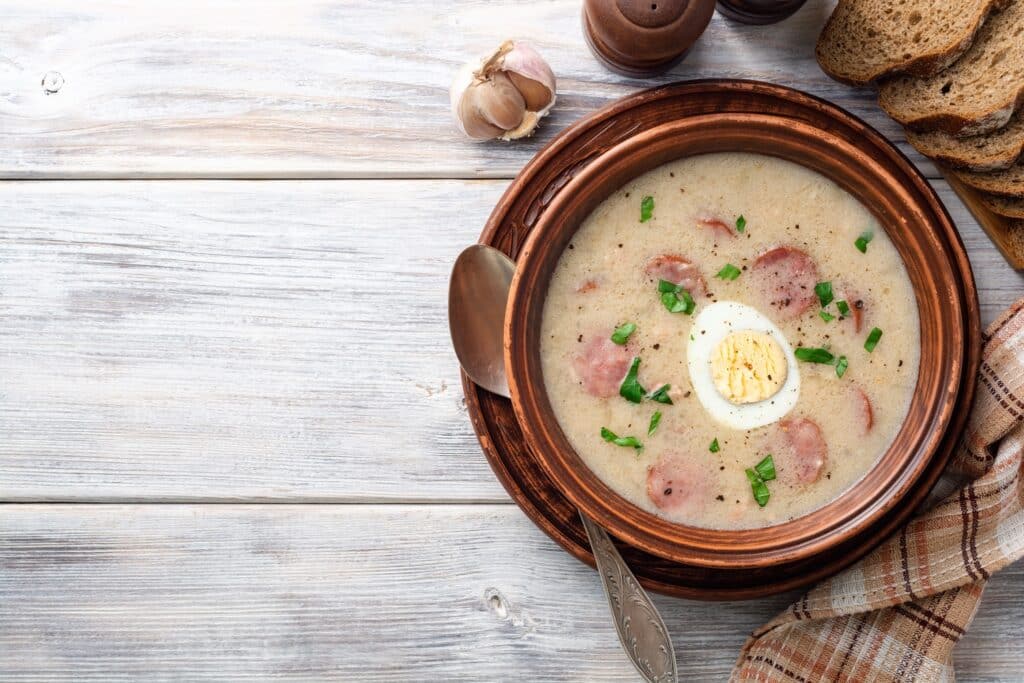 Polish cuisine is relatively diverse due to the influence of its European neighbors. Poland’s traditional dishes have a lot in common with foods from Germany, the Czech Republic, and even Hungary. While Polish dishes don’t always have complex flavor profiles, they do make regular use of certain pungent seasonings. Some of the most popular Polish spices and herbs include:

No herb is used more than dill in Polish cooking. This member of the carrot family and relative of fennel is a staple in many Polish preparations, including Polish pickles. Its lemony herbaceous notes are also essential to the flavor profile of the dill soup called zupa koperkowa. In many of these dishes, dill is the star of the show, with most of the other ingredients playing background roles.

After dill, parsley is the next most beloved herb in Poland. The strong grassy notes and light bitterness of flat-leaf parsley are in essential additions to many Polish classics.

It is worth noting that Polish cooks use both the leaves and the roots of this herb. Parsley leaves show up in some versions of kotlety mielone, a fried pork patty, and one of Poland’s favorite comfort foods: rosol. Rosol is the classic chicken soup with egg noodles. The parsley plant roots are among the ingredients for Polish borscht and are used in the aforementioned rosol as well.

Allspice is a distinctive berry with its origins in the West Indies. The spice’s name comes from the fact that its flavor profile includes elements of many other spices, including cinnamon and cloves. You can find allspice in some of the most distinctive Polish recipes. The complex spicy sweetness of allspice berries brings a depth of flavor to dishes like Polish sour bread soup made with fermented bread crusts. Allspice is also one of the main seasonings in some rosol recipes.

Leeks are an ancient onion relative that started in Asia. It has become a fundamental ingredient in European foods, including those from Poland. The strong oniony notes of the leek are crucial to the flavor profiles of many Polish recipes. For example, leeks are essential to Poland’s version of the beer soup called borscht and to czernina. Czernina is a soup made with duck blood. You will also see leeks used in some recipes for pierogi fillings.

Bay leaves originate in the Mediterranean, and while they may be more associated with cooking from the Southern part of Europe, they are heavily used in Polish cooking.

Like they are in other parts of the world, bay leaves are reserved for the Polish dishes that braise for a long time. Their mild bitterness and savory woodsy quality make them an essential complement for long-cooking tomato-based dishes like golabki, which are cabbage rolls in tomato sauce. You will also see bay leaves in zupa ogorkowa, which is cucumber soup and in the Polish version of Hungary’s famous goulash.

While Polish food cannot be considered spicy by any means, there are a few dishes that make use of the heat from hot peppers. These include zupa rybna, which is a fish soup. Recipes for the tripe soup called flaki also often add pepper flakes or powdered hot pepper.

Both the roots and the greens of celery get used in Polish dishes. The savory herbaceousness and mild bitterness of celery complement these dishes and more. Its umami properties are essential to rosol recipes and to the Polish hunter’s stew known as bigos.