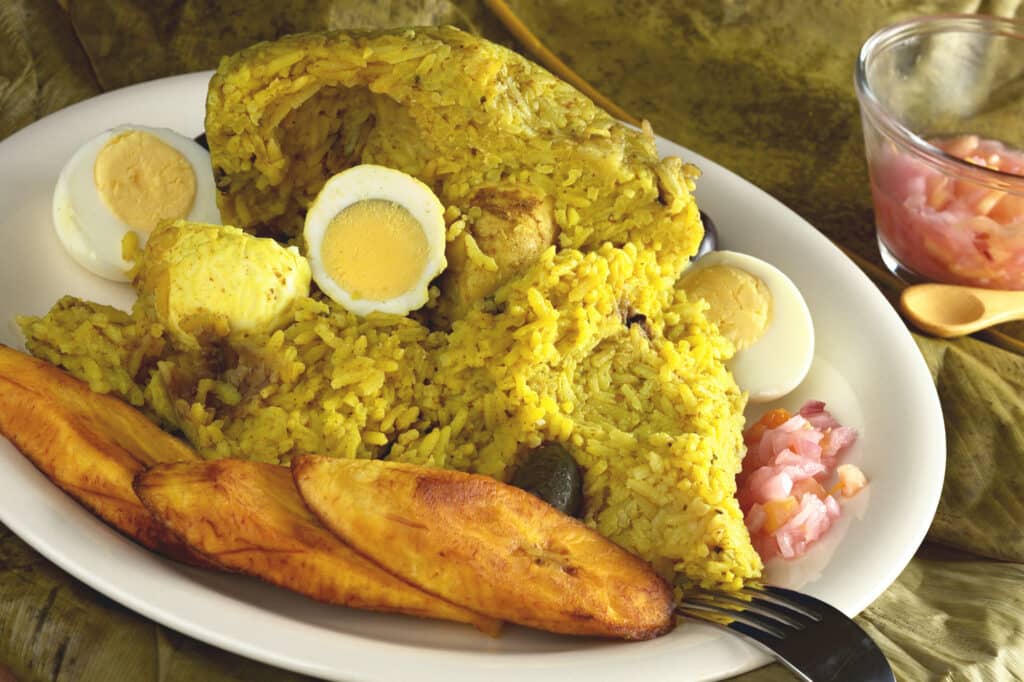 Like many New World food cultures, Peru’s cuisine features blends of local and Old World seasonings. The flavor profiles of Peruvian dishes can be complex, pungent and heavy on the herbs. Here is a look at the most popular spices in Peruvian cooking along with some of the herbs and other seasonings.

There are many different chili peppers used in Peruvian food, but none is more essential than aji amarillo. A moderately hot pepper with a Scoville rating of 50,000 SHU at its hottest, it brings its heat and fruity flavor to local favorites like escabeches and causa rellena. Its fruitiness is unique so you won’t get its flavor from any other chili pepper variety.

Peru’s cuisine isn’t known for being particularly spicy, but aji rocoto can give it some heat. This round chili has thick walls and a fiery flavor. It is used to make dishes like rocoto relleno and hot sauces.

Cumin’s earthy bitterness and warmth give a savory edge to Peruvian adobo. Brought to Latin America from Asia, this spice is an important addition to many everything from choclo al comino to seco de carne.

Like most other countries’ cuisines, Peruvian dishes utilize black pepper for a touch of heat and a slightly lemony kick. Black pepper got to Peru via the Spanish and has been adopted into the country’s staple spices.

Garlic is one of the world’s most popular spices because of its versatility. Its pungent sulfurous flavor profile pairs well with many ingredients and can work in many savory dishes. Like some of the other spices on this list, it probably got to Peru via the Spanish. Today, it is a key ingredient in many classic Peruvian dishes.

As it is in the rest of Latin America, cilantro is one of the most commonly used herbs in Peruvian cooking. Fresh cilantro shows up in dishes like lomo saltas and various stews and soups where it provides a bright, herbaceous flavor with citrusy notes. It is also an important ingredient in the Peruvian equivalent of salsa called aji and in ceviche.

Also called albahaca in Peru, basil is as important to many Asian dishes as it is in Mediterranean cooking. Basil got to Peru from Asia via Chinese immigrants and is now used in many Peruvian dishes. It brings a minty, grassy flavor with strong licorice and citrus elements that make it a versatile seasoning option.

Native to Peru, huacatay is used throughout Peruvian cuisine but is especially common in the southern part of the country. Otherwise known as Peruvian black mint, it has a flavor similar to a blend of basil and mint with citrus. You will see it used in marinades, stews, and ajis as well.

While oregano is not native to Latin America, it has come to play a major role in Peruvian cooking and you can find it in many markets around the country. Both fresh and dried oregano leaves get used in Peruvian stews, soups, and other dishes.

Also known as Andean mint, muna is a Peruvian herb used in pachamanca and other local dishes. You can use it both as a culinary herb and as a tea herb.

Known as epazote elsewhere in Latin America, paica is used as a seasoning and sometimes as a tea herb. Paica’s flavor is unusual with the most similar analogs being anise and tarragon but with minty, citrus notes. It is used in pachamanca as well as in quesadillas and enchiladas.