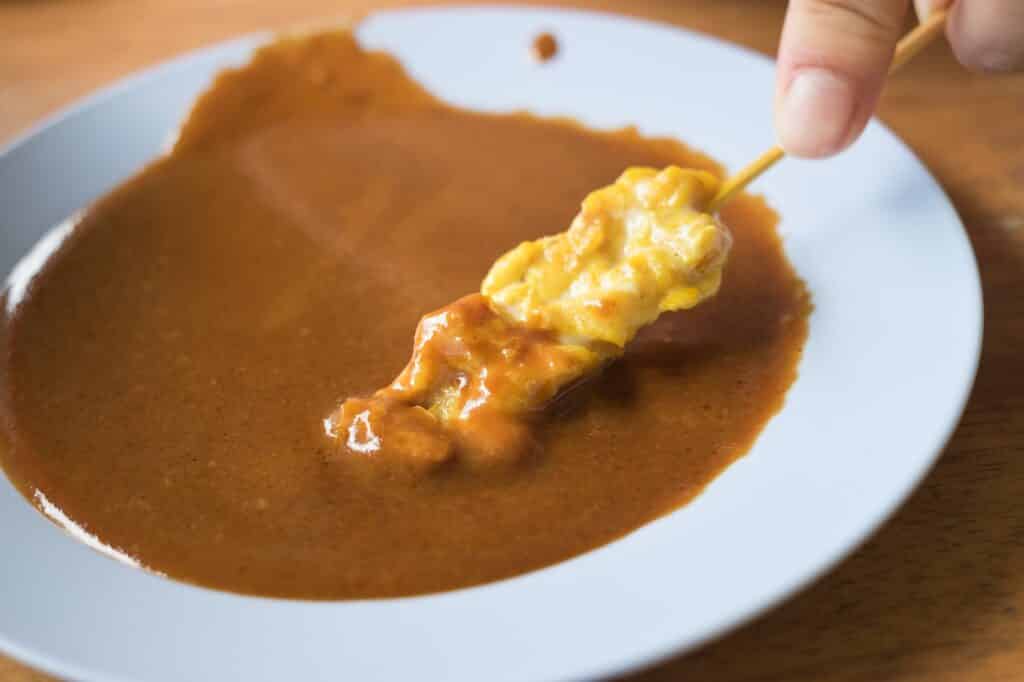 Peanut sauce is also known as satay sauce and is most often associated with Thai cooking, at least in the West. Peanut sauce and variants of the satay dish are found throughout South Asian cuisine. Indonesian and Malay cuisine both include versions of it and peanut sauce.

Traditional peanut sauce is made from roasted or fried ground peanuts, not with peanut butter. This is unlike the Western versions that use peanut butter as a substitute. Ground peanuts allow for a better melding of the peanut flavor with the sauce’s other flavors.

Peanuts are from the Americas. More specifically, they are believed to come from the area comprising what is now northern Argentina and Southern Bolivia. They were introduced to the rest of the world by Spaniards who took the legume to Africa and Asia.

There are various origin stories for the satay dish, which is so closely connected to peanut sauce. One story is that it came from Malay and Javanese vendors who were inspired by Arab kebabs.

Peanut sauce’s flavor varies depending on where it is made. Ingredients in the Thai version of the sauce are different from those in the Malay and Indonesian ones. In all the sauces, the main flavor element will be nuttiness from the roasted or fried peanuts they contain. Along with the nutty flavor, the sauce may be tangy or slightly sweet because of ingredients like tamarind and sugar. Chili peppers will make it somewhat spicy.

Because peanuts are highly nutritious, peanut sauce does contain a high number of beneficial compounds even though the other ingredients will differ depending on the version. You will get a significant portion of your daily nutrition from nutrients like:

By making peanut sauce a regular part of your diet, you may be able to prevent or treat health problems like:

Peanut sauce does come with a few significant health concerns that include its sodium content. The high sodium in peanut sauce may cause or exacerbate high blood pressure. Peanut sauce does come with a significant caloric load so you may need to limit your consumption if you are trying to lose weight. Also important is the fact that peanuts are a food allergen for many people and the allergy is often life-threatening.

The traditional way to use peanut sauce is as a basting sauce and/or condiment for pork, chicken, or goat satays depending on where you are in South Asia. Other uses for it include as a dipping sauce for vegetables or fried tofu and as a salad dressing.