Parsley’s name comes from the Greek word “petro.” Petro means stone because parley was first discovered growing on Greece’s rocky hillsides. Greek legend stated that the herb grew up from the places where Archemorus’s blood was spilled when he was bitten by a serpent. The ancient Greeks used parsley as a symbol of death rather than as an herb for cooking.

The ancient Romans used parsley as a digestive aid and sprinkled it on dead bodies to cover the smell of decay.

Because parsley has been cultivated for so long, it is unlikely that the modern varieties bear much resemblance to the ancient ones.

Later in history, parsley was mentioned among the plants in the gardens of Charlemagne and of Catherine de Medici. It was said that Charlemagne liked to eat cheese with parsley seeds. 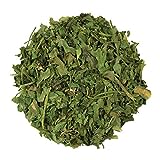 The cultivation of parsley during medieval times was surrounded by superstition. The superstitions included the notion that parsley seeds went to hell and came back 9 times before germination. This was believed to account for the herb’s long germination time. Another saying of the period was that only when a woman was master of a household would parsley grow.

17th-century physician and astrologer Nicholas Culpepper considered parsley a diuretic and believed that it could relieve discomforts associated with menstruation as well as bring them on.

Parsley is widely used as a garnish and many people consider it bland. While chopped parsley can make a dish look more attractive, there is more to parsley than just its looks. What it adds to dishes is a slight bitterness. That bitterness can brighten flavors in a similar manner to the addition of lemon juice. It provides a contrast that enables other flavors to stand out. Cooking it for long periods can cause the flavor to fade, so it is best to add chopped fresh parsley at the very end of cooking. Note that the flavor of the flat-leaf variety is stronger than in the curly-leaf one.

Parsley offers many health benefits because of the nutrients it contains, which include:

Eugenol: This essential oil has been used as a dental anesthetic and as an antiseptic agent. Eugenol may also be effective for lowering blood sugar levels in diabetics.

Antioxidants: Parsley is an excellent source so antioxidants like apigenin and luteolin.

Minerals: From 100 g of parsley, you can get 12 percent of the daily recommended intake of potassium. Parsley is also a good source of calcium, manganese and iron.

Vitamins: Parsley is rich in vitamins like vitamin A, C and E. It also offers high levels of Vitamin K and folates. Like many other herbs, it contains a variety of B vitamins including B-5 and B-2. Parsley may also contain more vitamin K than any other herb since it has more than 1300 percent of the recommended daily intake.

Diabetes: Research in Turkey has shown that diabetic rats that were fed parsley had lower blood sugar levels after a month.

Osteoporosis: Parsley is a good source of calcium. This is important since osteoporosis causes calcium depletion in the bones. It also contains folic acid, which breaks down the amino acid that causes osteoporosis.

Parley is the main ingredient in chimichurri, which is a South American marinade and condiment. Chimichurri is used as an accompaniment for grilled meat, especially beef. Parsley can also be added to ground beef for making meatballs or to the dough for making bread.