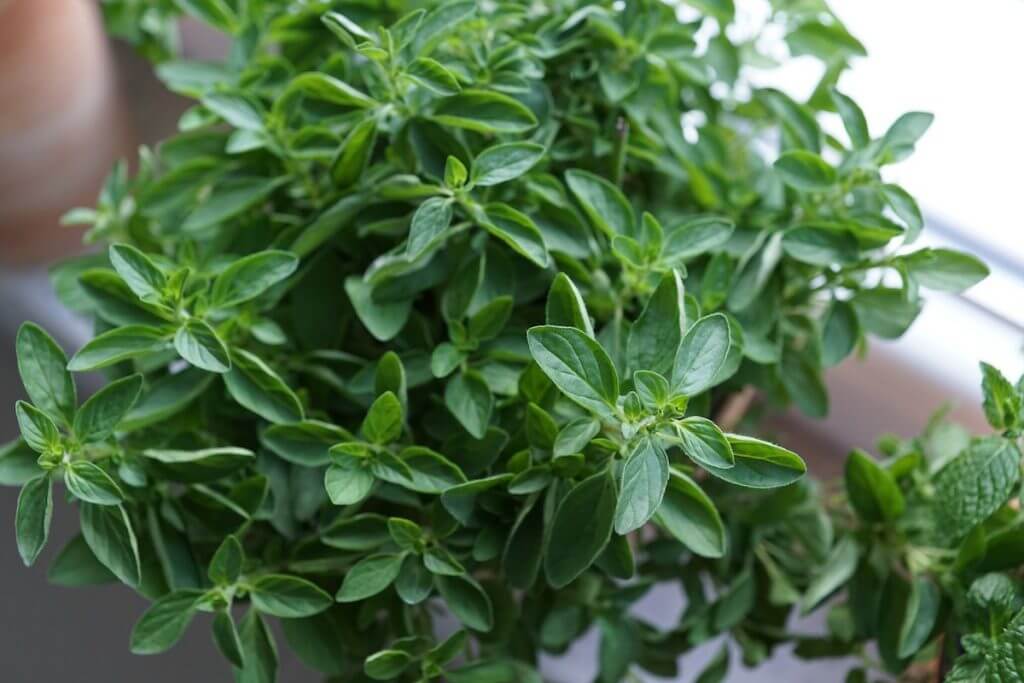 Oregano is the herb everyone thinks of when making pizza sauce or pasta sauce. It is a common ingredient in many Greek recipes as well. In short, its zesty bite and slight peppery edge make it a versatile addition to a large number of savory dishes. This is one of those herbs that every serious cook keeps in their spice cabinet, with some going as far as to buy it in bulk or to grow it in their herb garden.

Despite its singular importance in western cooking, you do have a rich selection of alternatives if you run out of it.

Oregano and marjoram both belong to the mint family and the similarity is such that oregano is often called “wild marjoram.” Marjoram’s flavor is a milder and more floral than oregano’s, which is sharper and more assertive. Some cooks use the two herbs interchangeably. Many recipes make use of both herbs thus benefiting from marjoram’s complexity and oregano’s relative pungency. Still, marjoram is clearly your best oregano alternative just by virtue of its similarity.

Because marjoram’s flavor is a little more delicate, it may not hold up to long cooking. In other words, it is a good idea to add it towards the end of cooking time. The proportions are also important. Use three parts of marjoram for every two parts of oregano that your recipe requires.

Yet another member of the mint family, thyme is a popular oregano substitute for many chefs. It is especially effective in tomato-based dishes as well as those that feature beans and potatoes. It is also useful for salad dressings. It does differ in appearance to some extent as its leaves are smaller, but it provides a very close approximation of the oregano taste.

Note that there are many different varieties of thyme. You will want to focus on the French and English varieties when seeking a good oregano substitute. When using thyme in place of oregano, use exactly the same amount that your recipe requires for oregano.

In a pinch: Sage

Sage is another Mediterranean herb and is one that many cooks consider the perfect complement for fatty foods. In addition, it works well with poultry and is a popular Thanksgiving seasoning for turkey. Sage pairs well with other herbs and is effective in most dishes that call for oregano including vegetable dishes and soups. You can also deep fry the leaves and use them as an attractive garnish.

When using sage in place of oregano, it is best to use the fresh herb as this will give you the full effect of its flavor. Unlike oregano, the dried form is not ideal. Note that both oregano and sage are strong enough to handle long cooking times so it is fine for use in dishes that require extensive braising. When replacing oregano with sage, use it in exactly the same amount as that dictated by your recipe.

Basil is another popular oregano replacement. It is especially useful when making tomato-based pasta sauces and beef dishes. Italian seasoning is another option worth mentioning. Along with various other herbs, Italian seasoning contains oregano and can be an effective stand-in for the herb. Naturally, it goes well with dishes that require oregano.