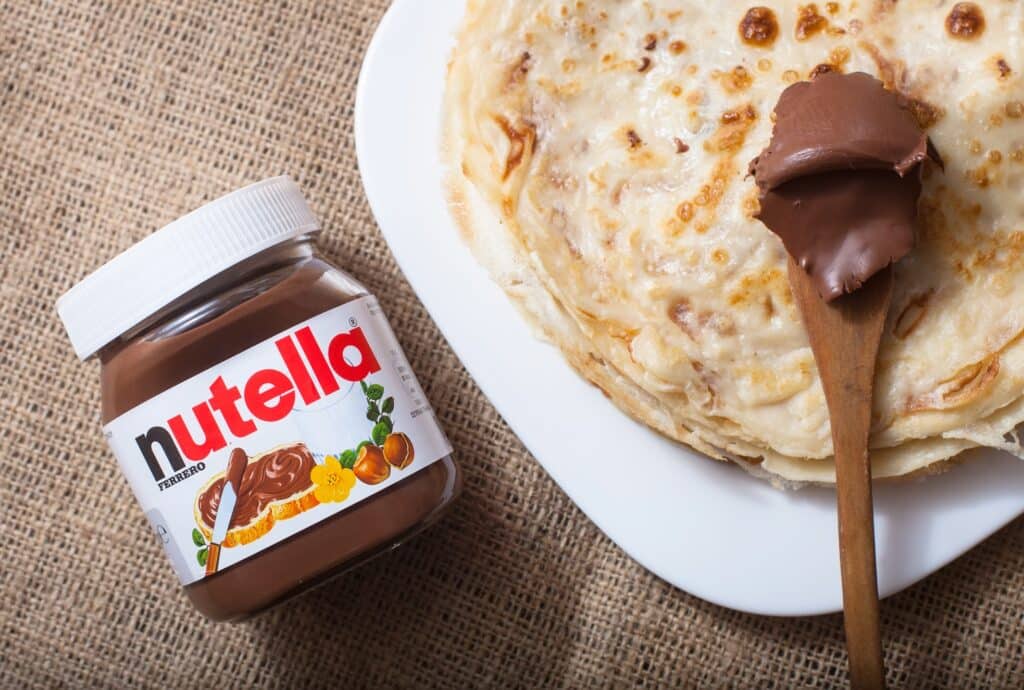 Nutella’s inventor was an Italian pastry chef from Turin named Pietro Ferrero. According to legend, Fererro invented Nutella to be a sweet treat for factory workers. The blend of chocolate and hazelnuts was not new, as the two were already combined in a traditional confection from Piedmont called gianduja.

In 1925, he perfected an early version of the spread that would be enjoyed by children, who would eventually be the demographic that Ferrero would target. At the start of World War II, Ferrero took refuge in Alba. Toward the end of the war, he came up with the idea of adding cocoa butter to the chocolate mixture to make it softer.

During the period immediately following the war, cocoa was in short supply. Ferrero’s early version of Nutella– called Giandujot after a character from local carnivals — allowed him to use a little cocoa along with a lot of hazelnuts to create a chocolate-flavored product that was sold wrapped in tinfoil and which could then be sliced. Ferrero’s Giandujot cost much less than the scarce chocolate.

The next Nutella precursor came along in 1951 and was called SuperCrema. SuperCrema had a more spreadable consistency and was sold in jars. One story of its origin is that the loaves of Giandujot began melting during a particularly hot summer, and this necessitated repackaging them.

The product that we now know as Nutella came along in 1964. An Italian law that made it illegal to use superlatives in product names made the name change necessary. The Nutella name comes from the English word nut with the Italian suffix ella, which means sweet.

Over the ensuing decades, Nutella grew in popularity throughout Europe and across the world. The first production plant outside of Europe opened in Australia in 1978.

Today, Nutella remains extremely popular in its land of origin. Italians use around 60 million jars each year.

Nutella has the deep coffee notes of chocolate blended with the earthy nuttiness of roasted hazelnuts. It is sweet and has a smooth consistency with a hint of creaminess.

Nutella is not a great source of any nutrient, but it does contain moderate amounts of some important ones. It contains beneficial compounds like:

By consuming Nutella, you may be helping to prevent or treat such illnesses and health problems as:

Nutella is a calorie-dense food, so even a small serving can add a lot of calories to a dish. One serving also contains most of the sugar you should consume in a day. You may want to restrict your intake if you are trying to lose weight or avoid high blood sugar. Nutella contains a small amount of caffeine, which some people might see as a benefit, but it might be a drawback for others.

The main way to use Nutella is as a spread for bread, but it can be used as an ice cream topping, served with fruit, or in brownies.