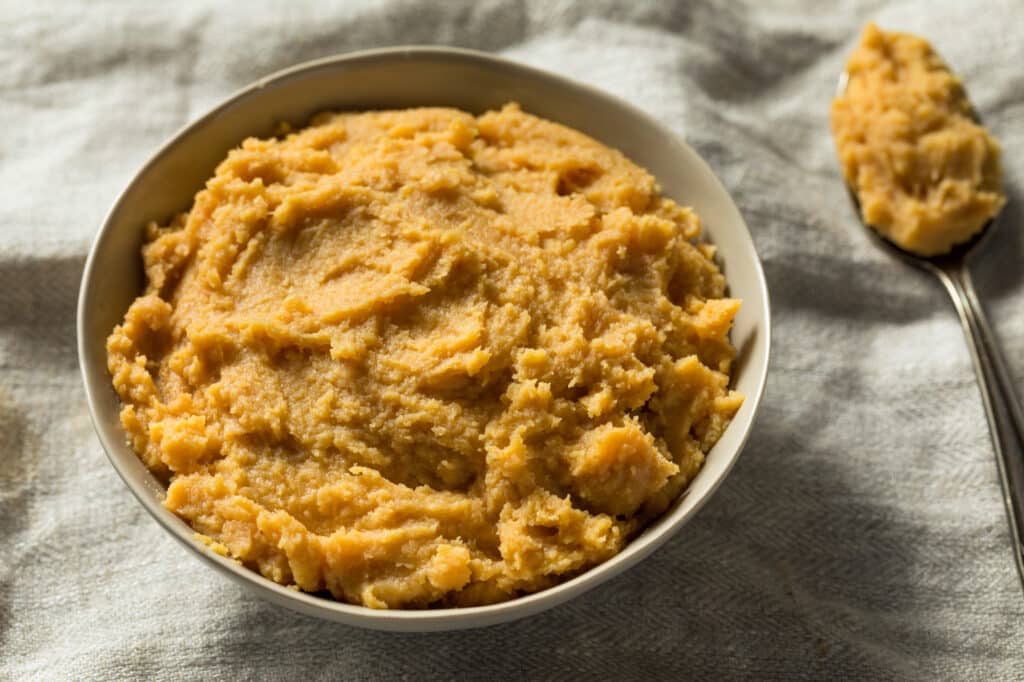 Miso can be made from different grains but the most common type is made with soybeans. It is a soybean paste fermented with salt. Miso was first made in ancient China according to some sources, while others say that it originated elsewhere.

The historians who believe that it comes from China say that it dates back to 4 BCE and began as a paste called jiang. This paste was the product of fermented soybeans and included animal proteins. The use of jiang began to spread to neighboring countries in 7 BCE. When it got to Japan, it became miso but the word miso did not appear until 800 CE. Miso evolved in Japan, with multiple regional variations. The industrial production of miso began there in the 1800s.

Another theory posits that miso came from Korea and that it was first made with tama, which are fermented miso balls. Still another theory is that miso originated with salt production during the Jomon period. Historians who advance this theory believe that the culture of making miso began and evolved naturally in Japan.

In the year 927, miso was mentioned as an ingredient in soup for wealthy people. Because it was expensive, it was used sparingly and was prized as a seasoning for fish and vegetables.

The miso soup that we know today became popular during the 14th and 15th centuries. Parties for making miso soup were a tradition at that time. At these parties, the host would prepare the soup and the guests would bring sides to be consumed with the soup.

Soy sauce became a more popular condiment in Japan’s urban areas by the 1900s with most miso being limited to use in soup. Miso remained the more popular option in rural Japan throughout the 20th century. In recent years, it has become popular all over the world for the flavor and aroma that it gives to food.

Miso gives food a rich umami flavor along with a strong dose of saltiness.

Miso is world-renowned for its health benefits because it contains important nutrients like the following:

Miso may be useful as a remedy or preventive measure for certain health issues, including these:

Miso is very high in salt and should be consumed in moderation to avoid health issues associated with excessive salt intake.

Miso’s strength is in its versatility. The traditional ways to use miso include as a flavoring for broths but some varieties of miso are great in salad dressings while others may be used in stews and marinades.