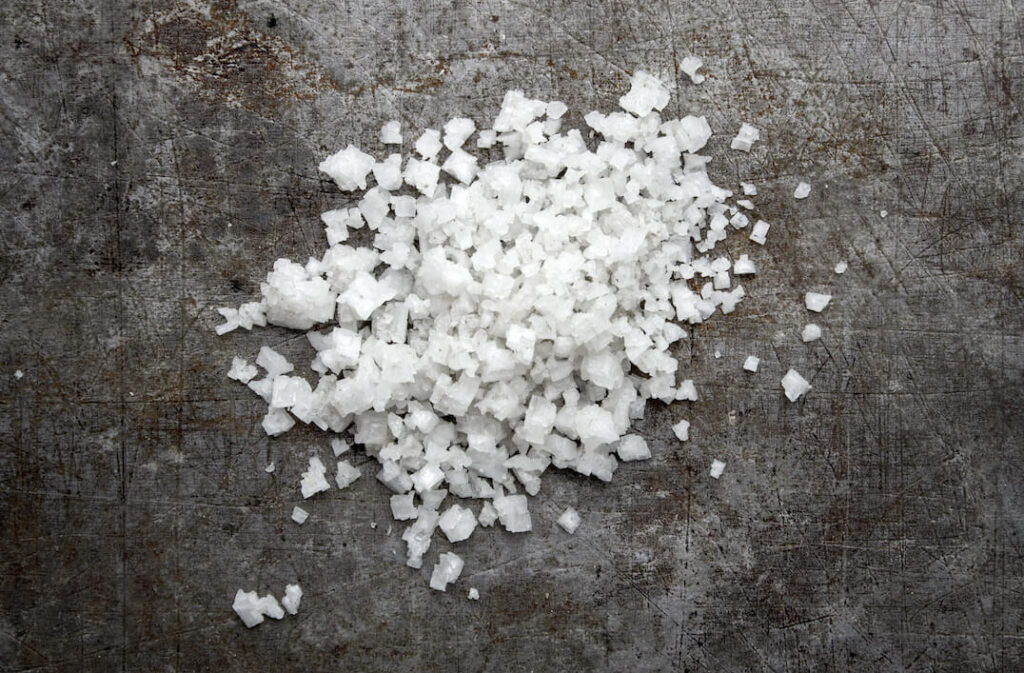 Any discussion of kosher salt and sea salt should start with the fact that they share the same chemistry. Another important fact that you should note is that technically, all salt could be considered sea salt because it existed in an ocean at one point. However, sea salt is generally defined as salt harvested from a living ocean using evaporation. Kosher salt can come from the sea, or it may be mined like regular table salt. How are they similar? Different? Let’s compare.

Do kosher salt and sea salt differ in flavor?

Both kosher salt and sea salt differ from regular table salt in that they do not contain iodine. The iodine in table salt gives it a flavor that many people consider unpleasant.

Note that while sea salt has no added iodine, it can have minerals and trace nutrients that will differ based on where the sea salt was harvested. The mineral content can give different sea salts their own unique flavor characteristics.

On the other hand, many chefs prefer kosher salt because its flavor is milder than that of other salts.

Kosher salt was originally used to draw out the blood from meats to make them ceremonially pure for Jewish people to eat. The larger crystals helped with that, as they could be washed away without having too much of an effect on the flavor of the meat.

These days it is often used for adding a crunch to some dishes. Many cooks also find it easier to pinch and sprinkle evenly and to measure by touch due to the size of the crystals. In comparison, smaller crystals may collect and cause some bites to be saltier than others.

Sea salt is mainly used as a finishing salt as the taste of the minerals may not be easily detected after cooking. Many sea salts are colored due to minerals and other impurities. For example, Hawaiian sea salt is pink due to iron oxide from volcanic clay. Sea salt may, therefore, be used to provide a dramatic visual element.

Can you use kosher salt as a substitute for sea salt? And vice versa?

The flavor differences will be relatively insignificant when paired with other spices in some dishes. However, you may be able to detect a difference in a dish where salt was the primary seasoning.

You will also need to be mindful of the crystal sizes, as they can affect the volume of salt you add to your dish. A teaspoon of fine sea salt will contain far more salt than a teaspoon of kosher salt. The larger crystals of kosher salt do not pack as tightly together, so it will deliver less flavor to your dish. For a more accurate measurement, you may want to measure by weight instead of volume.

Is kosher salt easier to find than sea salt? Or vice versa?

Both kosher salt and sea salt can be found easily on the shelves of most grocery stores. One is not easier to find than the other.