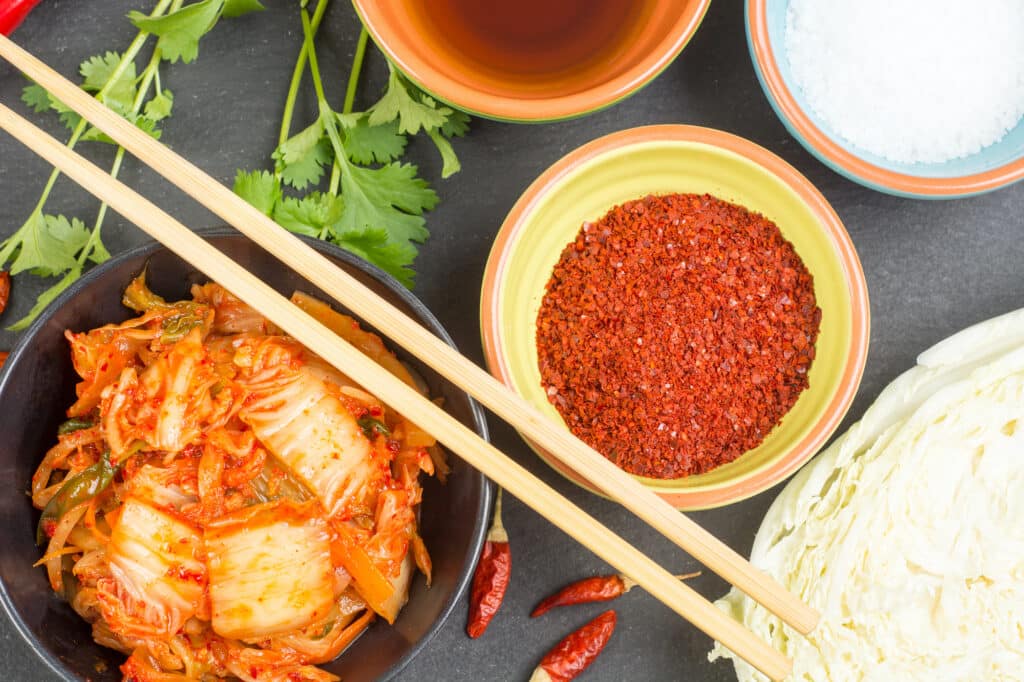 Korean food has become more popular in the West over the last few years with dishes like kimchi and bulgogi becoming household names. The distinctive flavors are produced with quality ingredients, techniques like fermentation (the foundation of many Korean dishes), and seasonings. Korean spices and other seasonings differ depending on where you are in Korea but there is a core list of essentials that are used in most places. The most popular Korean spices include:

The main source of heat in Korean dishes, gochugaru is the name for red pepper flakes. There are two main consistencies: fine and coarse with the fine being reserved mostly for gochujang. You can also choose between hot and mild gochugaru. Mild flakes are used to provide a little heat but mostly for color. The flakes can give food a brilliant red color without making it too hot to eat. Most gochugaru is hot and sweet with subtle smokey notes. It is commonly used as a table condiment and in kimchi.

A key seasoning in many Korean dishes, gochujang is fermented for many years in clay pots.

One of the main ingredients in gochujang is gochugaru but gochujang is only moderately spicy at most. The other ingredients include glutinous rice and soybeans. Gochujang is essential for various Korean favorites including rice cakes and vegetables. It is also the main flavor in bibimbap. Gochujang brings a significant amount of umami to dishes along with saltiness, earthy sweetness and a little heat.

Toasted sesame oil is one of the most distinctly Korean ingredients. Its concentrated nutty flavor makes it very different from untoasted sesame oil, which is the type familiar to most people. In addition to its effectiveness as a seasoning, you can also use it as a cooking oil. You will have to store it carefully to keep it from going rancid. It shows up in barbecue, dipping sauces, and rice dishes.

Often added to kimchi to speed up fermentation, Korean fish sauce also gets used in soups and side dishes. The two main varieties are the anchovy variety and the sand lance variety.

Korean fish sauce is stronger than both Thai and Vietnamese versions. It also has a crucial difference: it contains active cultures, which is why it is so important to the process of making kimchi. Kimchi made with other fish sauces is likely to spoil and won’t taste the same. Along with the fermentation benefits, Korean fish sauce has seasoning benefits. It gives food a strong umami flavor along with saltiness.

Korean soybean paste is fermented similar to Japanese miso. The two have a lot in common when it comes to flavor and appearance; however, there are some crucial differences.

Both are used to give a pungent, earthy smell to savory dishes but the flavor of Korean soybean paste is stronger and sharper. The reason is that it consists only of soybeans and salt whereas miso paste contains rice, which results in a sweeter, milder flavor. Korean soybean paste is used for soups, lettuce wraps and dipping sauces among many other dishes.