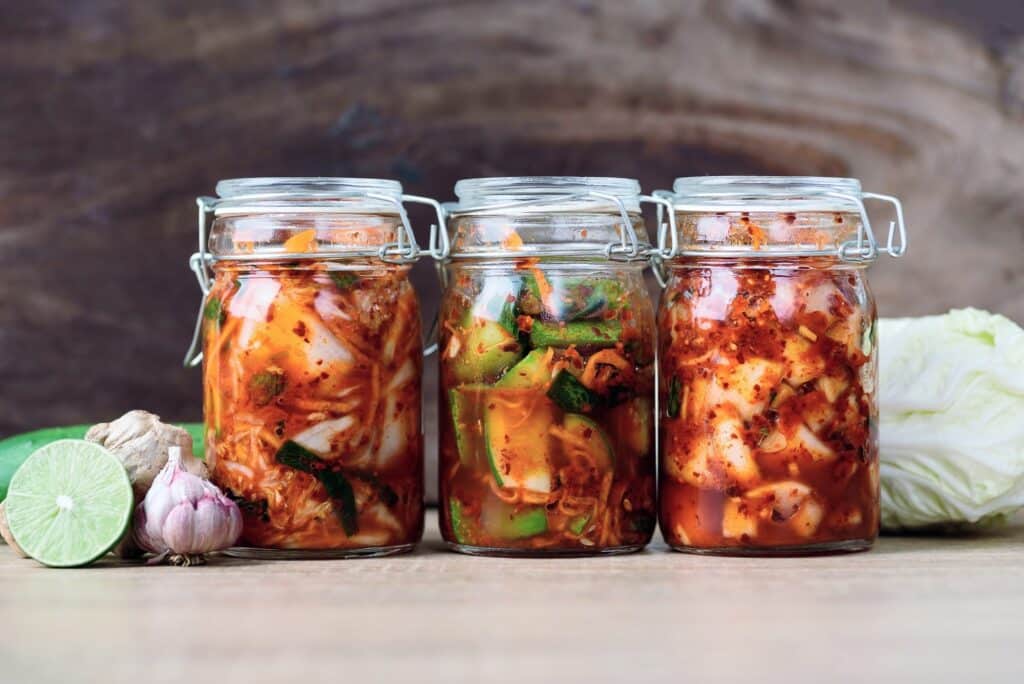 Kimchi is a Korean side dish and condiment that originated on the Korean peninsula during the Three Kingdoms period. According to Samguk Sagi — a historical document of this time — fermented vegetables were a big part of the Korean diet.

Like those vegetables, kimchi arose out of methods to preserve foods during the severe cold of Korean winters. Cabbage is believed to have been introduced to Korea around 2000 BCE, though some sources record it appearing even earlier. It was preserved the way other vegetables had been before it. Kimchi is called ji in some of the earliest references. Some records claim that it was invented in China and adopted by Koreans, but this point is controversial.

Chili peppers were brought to Korea around the late 1500s and were added to kimchi to make it spicy for the first time.

The traditional way to make kimchi is to brine the cabbage before seasoning it with a flavorful seasoning paste, and then fermenting it in an airtight container. Historically, the vessel used to store the kimchi during the fermentation process has been a kind of clay pot called onggi. Warmer temperatures speed up the fermentation, while cooler temperatures can extend the kimchi’s shelf life.

Today, Koreans consume an estimated 2 million tons of kimchi yearly. The dish is considered the most emblematic of Korean food culture and is often said to be the one that the average Korean cannot live without. It is so important that during a cabbage shortage in 2010, the Korean government suspended import tariffs to maintain a supply of cabbage for making kimchi.

In recent years, kimchi has grown in popularity outside of Korea. In part, it has become a favorite in the west because of its health benefits as well as for its flavor.

The flavor profile of Korean kimchi varies based on the cook’s preference. There are hundreds of recipes, so the preferred flavor profile varies from family to family. Kimchi can be made entirely with vegetables and may include items like sweet potato leaves. The seasoning paste may include any item from a long list of seafood, including oysters and salted squid, which give it a strong umami flavor. Most kimchi will have a concentrated sourness along with heat from chili peppers.

Kimchi is prized for its nutritional value, which comes from:

Eating kimchi may treat or prevent health problems like:

If you have concerns about high blood pressure, you may want to avoid traditional kimchi since it is high in sodium. There are low- and no-sodium commercial versions that you can try.

Kimchi can be served alongside many Korean dishes, It is a popular accompaniment to many soups and stir-fried dishes. It is one of the main ingredients in kimchi fried rice.