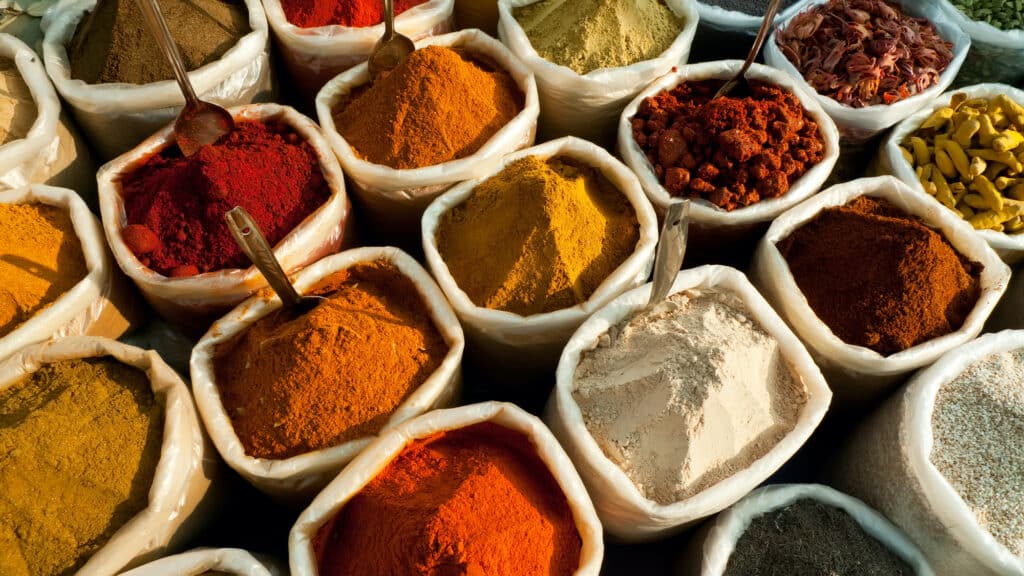 Indian cooking is famous for its implementation of spices from India and from all over the world. Some of these spices are more widely used than others. Here are some of the most popular spices in Indian cooking:

Like black pepper, green cardamom comes from India’s Malabar Coast. Harvesting must be done manually, which explains why it is one of the world’s most expensive spices. Green cardamom’s flavor has floral notes with a touch of eucalyptus. Common applications include tea and desserts.

Turmeric is made from the rhizome of a plant that belongs to the ginger family and looks a lot like ginger. While it does have a mild flavor, it is used mostly as a food coloring and for its health benefits. Turmeric is the ingredient in curry powder that makes it yellow and also appears to have some significant anti-inflammatory properties. It is used in Bengali pulao and a variety of chutneys.

Most would describe the flavor and aroma of saffron as being floral and similar to honey with grassy hints. Saffron also gives foods a distinctive bright yellow color. It is used to color saffron rice and to make saffron milk. The spice consists of the stamen of the crocus plant, which must be removed from each flower by hand. Saffron is the priciest spice in the world because of how much work goes into harvesting it.

One of the main spices that show up in a large number of savory Indian dishes, cumin is typically roasted or fried before being added to a dish. Cumin’s pungent and earthy flavor notes are essential in most garam masala blends. It is also among the main spices in a variety of Indian vegetable preparations and curries. It must be used carefully since it is pungent and can easily overwhelm other flavors in a dish.

In Indian cooking, brown and black mustard seeds are the two varieties used rather than the yellow mustard seeds that you see in Western cooking. They are hotter and more pungent than the yellow variety. The seeds are usually tempered when being used in Indian dishes, which involves frying them until they split open. The oil containing the seeds is then used in the dish.

The seed of the coriander plant has a delicate citrus note and brings a mild background sweetness to the dishes in which it is used. One of the oldest spices in the world, coriander seeds are commonly used alongside cumin throughout Indian cuisine. It is one of the spices that are usually tempered at the start of the cooking process but are also sometimes ground and sprinkled in. It is a popular ingredient in garam masala blends.

There are various kinds of red chili powders used in Indian cooking. Some are exceptionally hot while others — like Kashmiri chilies — are relatively mild. What Kashmiri chilies do bring to Indian cuisine is a vibrant red color. Other varieties include cayenne peppers and the bhut jolokia (ghost pepper).

The dried bark of the cinnamon tree is used in numerous dishes from all over India. Many of these dishes are savory, in contrast to cinnamon’s mostly sweet applications in the west. The spice is added early in the cooking process and is commonly tempered in hot oil, which is then used to cook ingredients or added at the end of cooking to finish a dish.