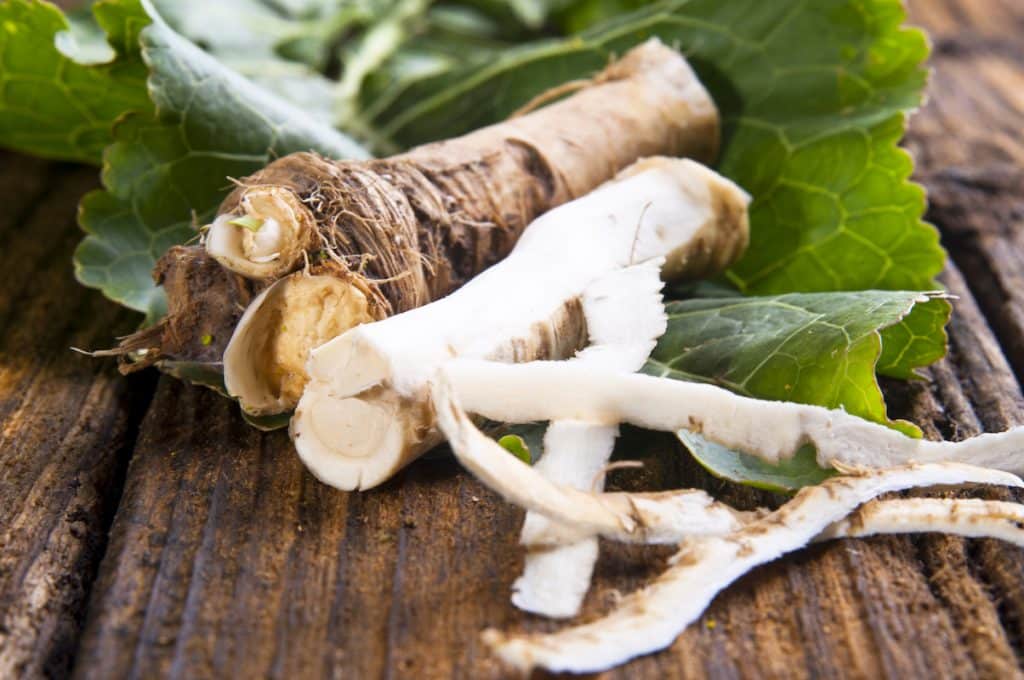 Horseradish was being used by the Egyptians in 1500 BCE. It would later be used by the Greeks as well. They used it topically and it also had a reputation as an aphrodisiac. It would be among the bitter herbs consumed during Passover by the Jews and they used it as a medicine as well.

The name is believed to have originated with the Germans who referred to it as meerrettich. The meer part refers to the sea because horseradish typically grows on the coast. The English began referring to it as mareradish, which would eventually become horseradish. The horse in this usage denoted something that was coarse or large. The radish part of the name comes from the Latin word for root.

The European consumption of horseradish as a food began in the central part of the continent and spread north to Scandinavia and west to the UK. It would first be eaten by rural British laborers and the working class in the mid-1600s. By the end of the century, it had become a staple condiment for British roast beef and for oysters. It was also the main ingredient in a tonic served to travelers lodging at inns.

The Europeans would bring horseradish to America. By the 19th century, it was common in the Northeast and could be found growing wild in some places. It was cultivated on a commercial scale by the mid 19th century and by the turn of the century, the commercial horseradish farming industry was thriving in Illinois by the Mississippi River.

The flavor of horseradish is similar to that of mustard, but more intensely sharp and hot. The tangy heat comes from the compound allyl isothiocyanate, which is also responsible for the very similar heat of wasabi.

Fresh horseradish contains a set of compounds that are very important for your health. A serving of this condiment can provide you with:

Because of these and other nutrients, horseradish is a great resource for the treatment and prevention of health problems like:

Making the traditional horseradish sauce involves grating the root or using prepared horseradish and combining it with sugar, cream, and spices. This is the sauce that is often served with roast beef in the U.K. Horseradish is also added to cocktail sauce, such as that served with cocktail shrimp. It can be used to enhance the spiciness of Bloody Mary cocktails. The leaves of the horseradish plant are edible as well and can be added to salads raw like any other salad green. It is also often dried and used as a powder. Horseradish powder can be used as a spice to bring that sharp heat to many a dish.