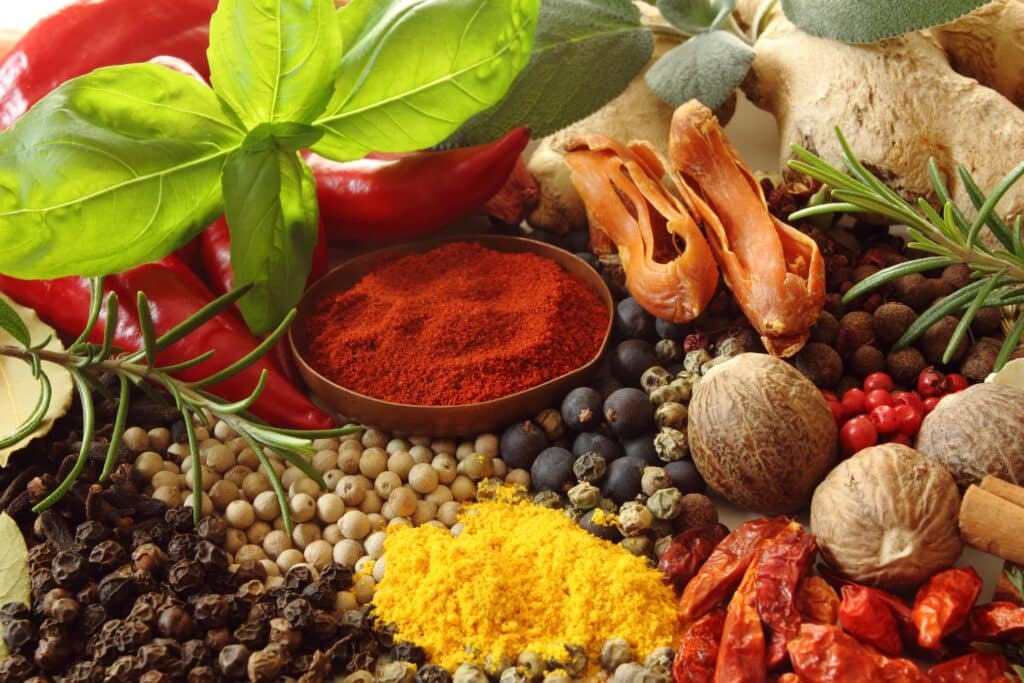 What identifies a herb as a herb and a spice as a spice?

Arguably, the most important difference between herbs and spices has to do with their respective sources. Herbs consist of a plant’s leaves while spices can come from any other part but are usually the seeds, bark, or roots of the plant.

Herbs and spices also tend to come from different parts of the world. Few spices come from the Western hemisphere. The small number of genuinely Western spices includes chili peppers from Mexico and Jamaican allspice. Most spices come from the Old World and have their origins in the Mediterranean or Southern Asia. In comparison, you can find culinary herbs all over the world.

Another way to differentiate between herbs and spices is to look at how they get used. Spices are often more pungent than herbs, so use them in smaller amounts when compared to herbs.

Most spices can stand up to longer cooking times without losing their flavor. Add herbs towards the end of cooking to ensure that their flavor does not fade. There are exceptions to this, such as rosemary and oregano, both of which you should add nearer to the start of cooking. It is also worth noting that virtually all spices are dried before use; you can use herbs fresh or dried, but most cooks consider fresh herbs to be the most flavorful.

Can you use herbs and spices interchangeably?

Typically, herbs and spices are not interchangeable. Each group brings something unique to a dish. Substitutions usually occur within each group. You would use spice in place of spice and an herb in place of an herb. As with many culinary rules, there are exceptions. The bay leaf is one of the most significant ones. The bay leaf is often said to be closer in its characteristics to spices than it is to other herbs. You can use ground bay leaves as an allspice alternative and vice versa.

Some plants can be both a herb and a spice

Coriander is often used as an example of a plant that can be both a herb and a spice. This is partly because the name coriander can refer to either the leaves or the seeds of the plant; however, fresh coriander seeds can also be considered both herb and a spice. Fresh or green coriander seeds are unique among seasonings since they have some properties of both the leaves and the dried seeds of their parent plant.

Garlic is another plant that can be said to fit in either the herb or the spice category or neither. Garlic powder could be considered a spice since it is dried and does not come from the leaves of a plant. A fresh garlic bulb could be viewed as an herb since it does not consist of the root, seeds, nor the bark of the plant and is not dried.