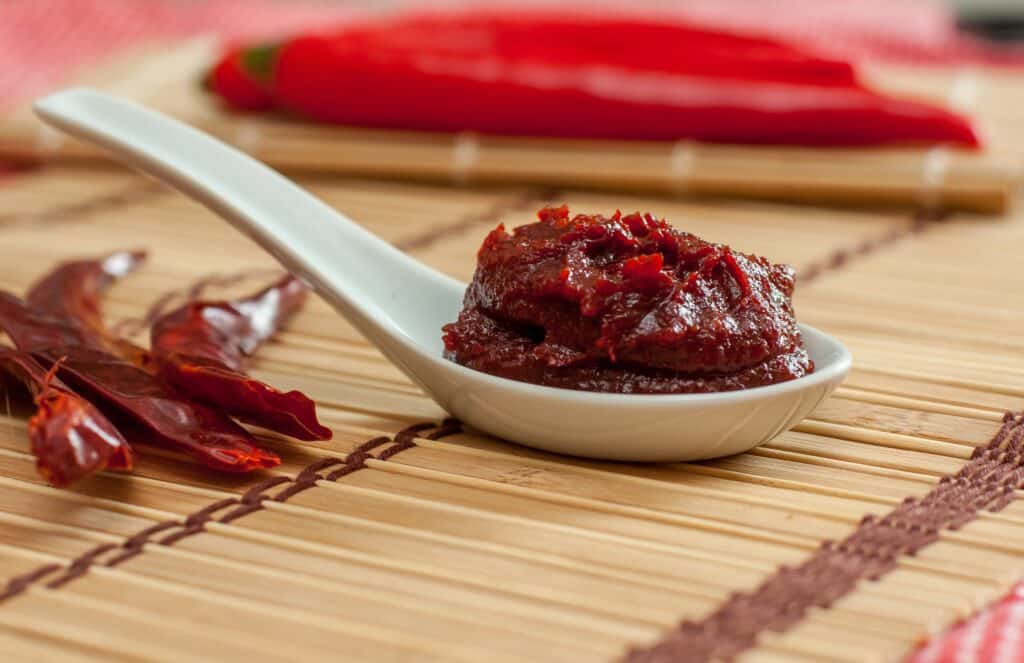 Gochujang and doenjang are two of the sauces that non-Koreans most closely associated with Korean cooking. Their flavors are powerful, pungent, and distinctive. In this SPICEography Showdown, we take a look at what each brings to dishes and how they compare to each other.

How does gochujang differ from doenjang?

The big differences between gochujang and doenjang begin with the ingredients. The most noticeable element in gochujang is the chili pepper. It is sometimes described as a chili pepper paste, though there is a lot more to it. Other ingredients include fermented soybean like meju or meju powder along with glutinous rice, garlic, and a sweetener. Some versions will have more flavorful ingredients.

Doenjang’s main ingredient is soybean; typical versions contain no chili pepper. The soybean in doenjang is in the form of meju, which are blocks of soybeans that have been boiled and mashed then left to ferment for about three months. Once fermented, the soybeans are placed in brine for the next step of the process. The mixture ferments again over several months eventually separating into a paste and a thinner liquid, The liquid is used as soy sauce (AKA ganjang) and the paste part is doenjang.

Because of the different ingredients, gochujang and doenjang have different flavor profiles. Gochujang’s taste is mostly about its heat from the chili peppers, with a little sweetness in the background. Doenjang is primarily a source of saltiness and umami similar to Japanese miso.

The different components and processing methods mean that these two sauces have different looks. Gochujang has a deep red color from the chili peppers and smooth, sticky consistency because of the glutinous rice. Doenjang is pale brown and has a coarse, lumpy consistency.

A third difference has to do with the nutrients these sauces contain. Each serving of gochujang will have a small amount of vitamin A as a result of its chili pepper content, as well as a little protein. Doenjang has much more protein along with minerals like iron and calcium.

Gochujang won’t be the best substitute for doenjang unless you want to spice up the meal. The heat, sweetness and lower level of umami make it the perfect sauce for adding spice but with a simpler and less challenging flavor profile. It will work in most of the same dishes, but it will make them noticeably hotter and sweeter.

Doenjang on its own won’t be a good substitute for gochujang, since it won’t have the heat or the sweetness. It is great if you don’t want spice but do want umami and the fermented complexity that comes with doenjang’s soybean content.

Use gochujang to make ssamjang, the condiment for the lettuce or cabbage wraps known as ssam. Use it in the sauce for bibimbap and in bulgogi. Use it as the basis for a dipping sauce to serve with Korean fried chicken. It works well with Western foods as well. Add it to marinades for barbecued meat, or use it as a burger topping to add a little heat.

Doenjang is an ancient condiment used in classic Korean dishes like doenjang jjigae, a tofu stew. Of course, one of the common uses for doenjang is as the other main element in ssamjang where it is combined with gochujang to create an intense umami sauce with spice and sweetness.