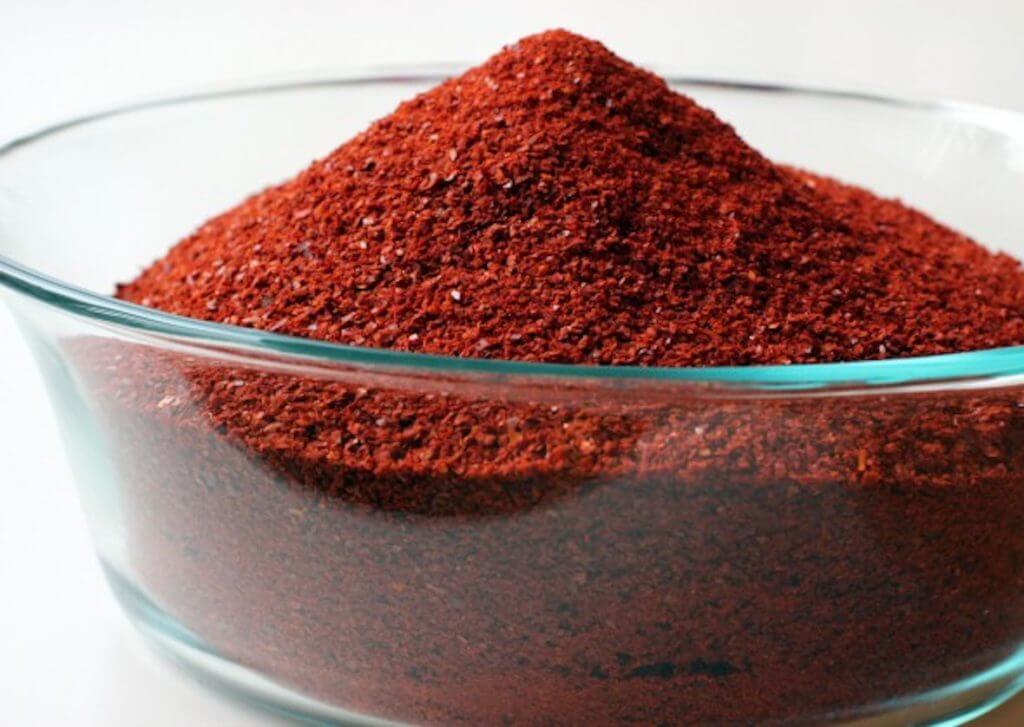 Gochugaru is the term for Korean red pepper flakes. The traditional form of the spices consists of sun-dried red chili peppers that have been ground coarsely. The final texture is somewhere between those of regular pepper flakes and fine powders like cayenne or paprika.

On the scale of Korean history, the adoption of chili peppers is a relatively recent occurrence since it only dates back to the 16th century. Today, gochugaru it is a staple of Korean food and is considered indispensable.

Chili peppers originated in Latin and Central America. Portuguese and Spanish traders brought them to Asia in the 16th century but there is evidence that the actual introduction of this spice may have occurred as early as the 13th century. In addition, there are Chinese and Korean references to chili peppers that go as far back as 850 AD.

Gochugaru is hot and sweet with smoky notes but is not as hot as many of the Latin American chili varieties. The heat level of gochugaru varies greatly and can fall anywhere between 1,500 and 10,000 Scoville units. The flavor also varies according to the methods used to dry the peppers. Many Koreans consider the flavor of gochugaru dried in the sun to be better than artificially dried gochugaru.

Like other dried chili peppers, gochugaru has many health benefits due to the nutrients it contains. Those nutrients include:

Vitamins: Dried chili peppers, including gochugaru are rich in vitamin E. They contain enough of this important antioxidant that a 2-teaspoon serving can provide 14 percent of your daily recommended intake. Gochugaru also contains high levels of vitamin A.

Dietary fiber: Gochugaru and other types of chili peppers are good sources of fiber.

Minerals: Like all dried chili peppers, gochugaru is a great source of iron. The body needs it to make red blood cells. Other minerals in gochugaru include copper, which your body needs to make the superoxide dismutase enzyme. This enzyme is important for preventing Lou Gehrig’s disease.

Regular consumption of gochugaru can help to prevent health issues like:

Heart disease: Red chili peppers like gochugaru are useful for lowering blood cholesterol. In addition, they help with other factors in heart disease like platelet aggregation and can help the body to dissolve fibrin. The body uses fibrin to form blood clots. Food cultures that use chili peppers tend to have considerably lower rates of heart attack and stroke.

Diabetes: The fiber in gochugaru helps to control blood sugar, which can lower the risk of developing diabetes. Fiber does this by helping to regulate the passage of food out of the digestive system.

The best-known use of gochugaru is in kimchi, the famous Korean fermented cabbage dish. It is considered an essential ingredient for kimchi. In fact, Korean cooks recommend against using any other kind of dried chili, as it will not provide the same results. Gochugaru is also an important ingredient in a variety of soups and stews like sundubu jjigae, which is a tofu stew.

1 thought on “Gochugaru: The Spice Behind Kimchi”