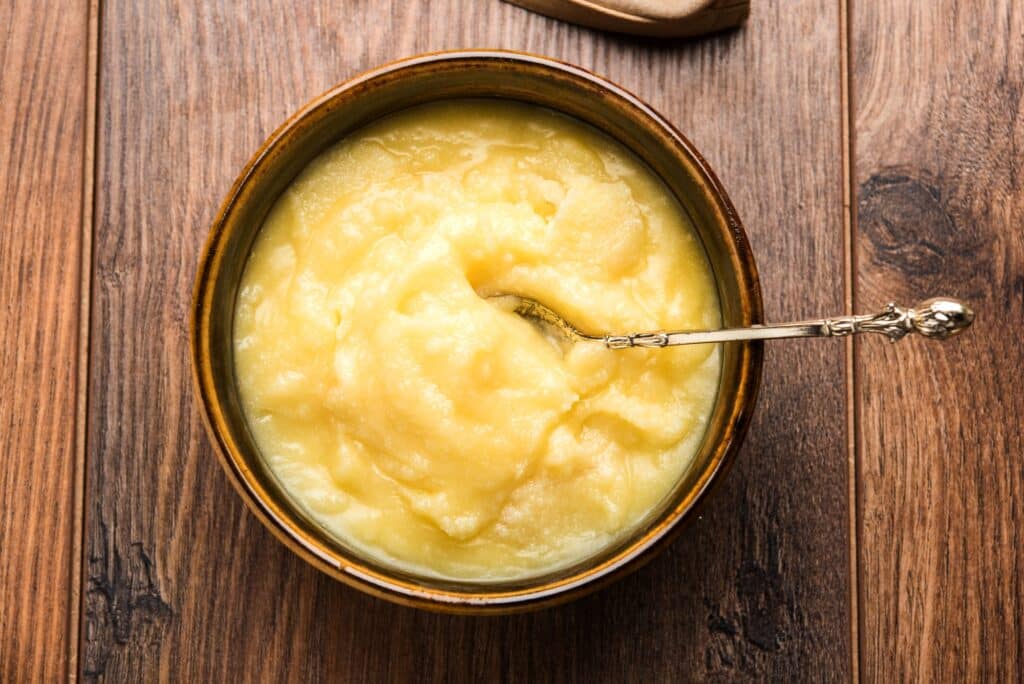 Ghee is an Indian invention. It has been in use for thousands of years. Some sources state that it originated about 1800 BCE, others claim that it is far older. There are claims that it was in use as far back as 6500 BCE.

Hindus consider ghee to be sacred along with all other products of cow’s milk. According to practitioners of Ayurveda, ghee from cow’s milk is beneficial for the immune system. In India, much of the ghee is made from buffalo milk, which is not viewed as sacred.

Ghee is made by simmering butter over low heat to remove the water content. The fat is then poured off leaving only precipitated proteins. That protein will still contain a significant amount of butterfat that can still be extracted by reheating the protein with vegetable oils. The use of vegetable oils creates lower grades of ghee.

Without the water content, the ghee has a long shelf life. Historians believe that ghee was invented as a means to store butter, which spoils quickly because of its water content. Without the water, the bacteria that cause spoilage cannot grow. The storage method was necessary because of the subcontinent’s hot weather. Ghee can last for years without going bad when properly made.

Separating the proteins also increases the smoke point. If left in, those proteins would burn at high temperatures.

Hindu culture places significant importance on ghee. In the Indian caste system, ghee purifies food. While a person of a low caste cannot normally consume food by someone who is of a higher caste, food cooked in ghee is permissible.

In India today, ghee is still considered the main cooking fat. It is growing in popularity around the world as people discover its many benefits.

Ghee’s flavor profile is primarily rich and buttery with a slight sweetness. The process of simmering it adds a caramelized note so that it takes on a subtle nutty flavor to complement the butteriness.

The health benefits of ghee are limited, but it does contain important nutrients, like:

When you consume ghee regularly, you can lower your chances of developing certain health problems such as:

Along with its health benefits, there are some good reasons to moderate your consumption of ghee. For starters, its fat is mostly saturated. Saturated fat in the diet is a major factor in heart attacks and strokes. Ghee is also rich in calories, which means it contributes to obesity.

Ghee is a versatile cooking fat because of its high smoke point and mild flavor profile. Ghee is used in rice dishes like biryani, in various South Indian curries and for brushing naan and roti. Because it can handle high temperatures, ghee is also useful for deep-frying.

Along with its applications in traditional Indian food, ghee is also a great addition to Western baked goods like muffins and breads where you can use it as a slightly more flavorful butter alternative.