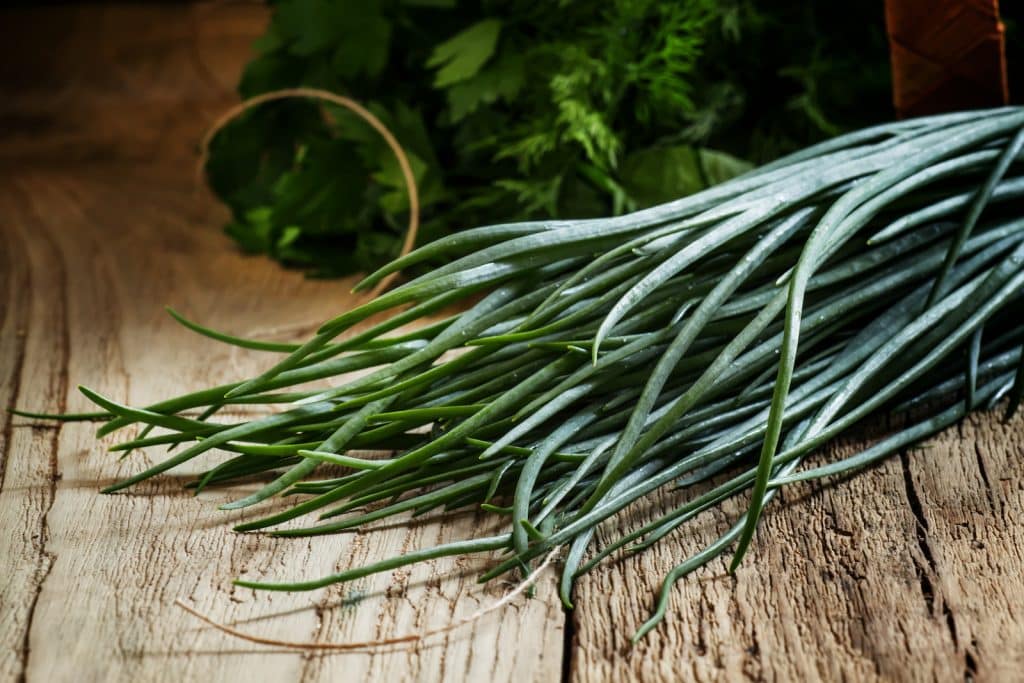 Garlic chives and chives both belong to the same family. These two Alliums share some visual similarities and are used only in savory dishes. Beyond that, they have some considerable differences despite the fact they both have chives in their name. If you want to know more about how these herbs stack up against each other, consider the garlic chives vs. chives SPICEography Showdown below.

How do garlic chives differ from chives?

The bulb of the garlic chive plant is fibrous and inedible; usually, only the green tops get used. In comparison, the entire stalk of the chive plant is edible.

The edible green part of garlic chives is flat like blades of grass. Chives stalks are hollow like the green parts of scallions stalks.

Garlic chives may also differ from chives as far as availability is concerned. They are used mostly in Asian cooking, which means that your local supermarket may not have them in stock if you are in the US or Europe. On the other hand, chives will be relatively easy to find.

Can you use garlic chives in place of chives and vice versa?

Both herbs are alliums, and one of the flavors that you get from garlic chives is that of the best-known allium: onion. It is not as bright or as clean as the onion flavor that you would get from chives but it is present nonetheless, which means that garlic chives can provide some of the taste that you expect from chives. The garlic part of its flavor profile will also work well in most dishes that call for chives so garlic chives will make a decent substitute most of the time.

When making this substitution, remember that garlic chives are more aromatic and flavorful when compared to chives. When replacing chives, you will need to use less than the amount the recipe requires for chives. How much less depends on your taste preferences.

You can use chives in place of garlic chives as long as you understand that it will not give you the garlic flavor. It provides only the light onion flavor with a subtle herbaceous note so you will need to use more of it to get the flavor intensity that you would get from garlic chives.

While you can find garlic chives in Europe, the herb is mainly associated with Asia and Asian cuisines. One popular application is as an alternative to the flavor of real garlic. Use it in Chinese stir-fried dishes as well as in egg rolls. It is also a fairly common ingredient in Japanese and Korean cooking.

Chives show up in both European and Asian dishes. In the same way that cooks may replace garlic with garlic chives, chives sometimes get used as substitutes for green onions. Often they are used more for enhancing the visual appeal of a dish than for their flavor. Chives can be added to salads, cream cheese or sprinkled onto soups right before serving them.