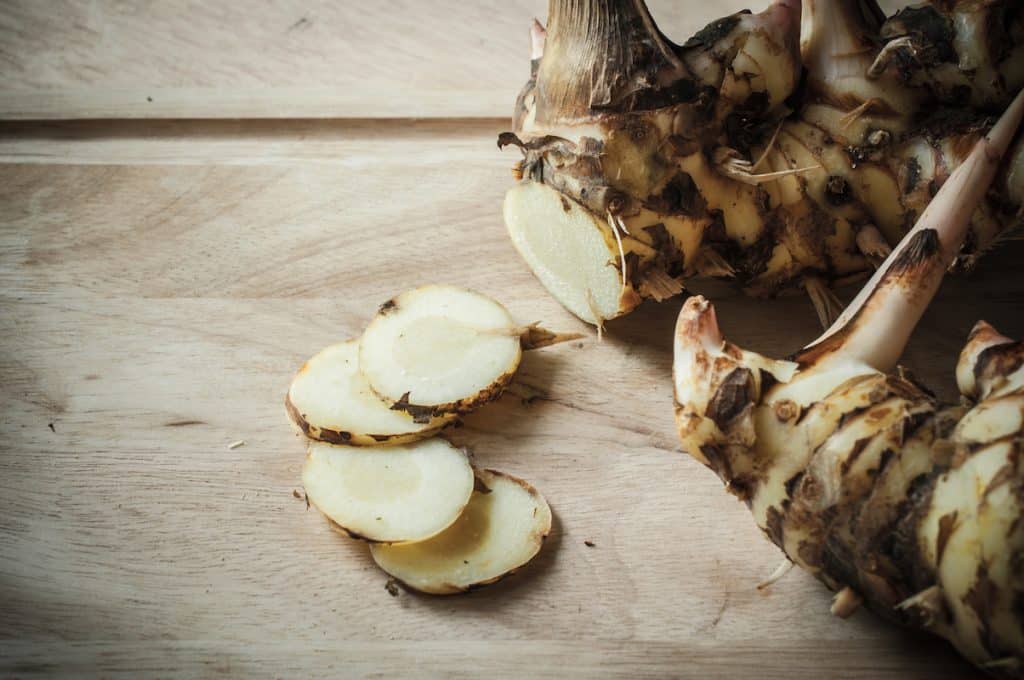 Galangal is a relative of ginger that originated in Indonesia but that is now cultivated throughout Asia. The earliest reports of its use come from Java and from China. It is a rhizome, just like ginger and bears a close resemblance to it. Galangal was known to the ancient Romans; it was one of the spices imported into Europe during the early spice trade and Apicius included it as an ingredient in his recipes.

The name galangal is thought to have evolved from an Arabic word, khalanjan. Khalanjan means mild ginger and may have come from Liangtiang, which means the same thing in Chinese. Its Latin name is Alpinia, which was given as a commemoration of Prospero Alpini, the Italian botanist.

Galangal was brought to Europe in the 9th century by Arabs who used it as a medicine. It was referred to as the spice of life by the 9th-century mystic Hildegard of Bingen. It shows up in English recipes from the Middle Ages; at this time, its name was written as galangale. Despite its centuries-long usage in both Asia and Europe, it was not formally recognized and given a biological classification until the late 19th century.

These days, most of the galangal in the world comes from India or Thailand. The Netherlands imports a significant amount of this spice.

There are different varieties of galangal and they can differ significantly in the intensity of their flavors. For example, the Alpinia galanga variety (commonly called greater galangal) has a floral taste with cinnamon notes; the Alpinia officinarum variety (lesser galangal) is stronger in those same notes and has a more medicinal flavor. Both spices have a mild peppery quality that is similar to the light spiciness of ginger.

Galangal can have significant benefits for health, which come from compounds like:

Galangal is believed to be effective for treating or preventing health conditions like:

Galangal is used in parts of China and India. In India, it is used in curries and as a medicine. It also shows up in dishes throughout Southeast Asia where it is a popular ingredient in Vietnamese, Indonesian, and Bangladeshi cuisine. It may be best known for its role in Thai cuisine. It is a perennial favorite among Thai cooks for its ability to add its spicy note to soups and stir-fried dishes. You will find it used in Thai dishes like tom kha goong, though some western variants of this dish use ginger instead of galangal.