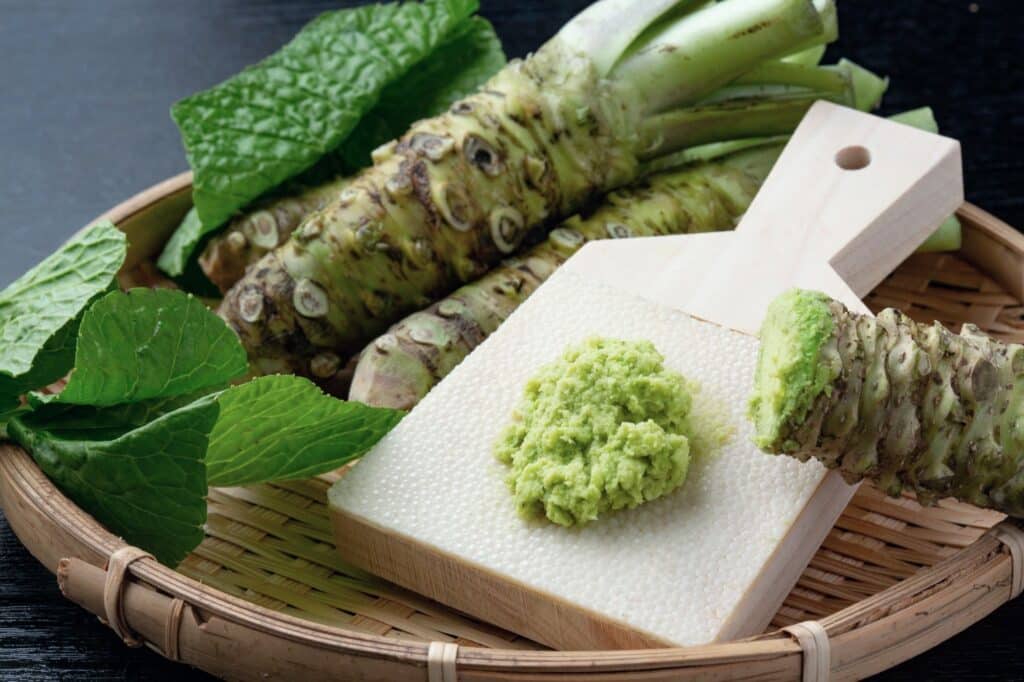 How does fresh wasabi differ from wasabi paste?

Fresh wasabi and wasabi paste come from different plants. Fresh wasabi comes from the Wasabia japonica plant. It is a rhizome, which means that it is a part of the plant’s stem that grows underground. Traditionally, the rhizome is grated on a sharkskin grater. Wasabi paste is the imitation wasabi that most people in the West know, and it consists of a combination of mustard powder and horseradish that is colored green with food coloring. You can also make it with wasabi powder mixed with water.

Horseradish, mustard, and wasabi all belong to the same Brassicaceae family. The fact that the three plants are related explains why their flavors are all similar enough that you can use them interchangeably. They contain the compounds — isothiocyanates — that are responsible for the heat that is wasabi’s best-known characteristic.

Fresh wasabi and wasabi paste don’t taste the same. Fresh wasabi doesn’t have the sinus-clearing intensity for which wasabi paste is notorious. It has a little warmth, but not as much as the wasabi paste, which delivers a strong burst of horseradish heat. Fresh wasabi’s subtle heat is preferred by purists since it does not distract from other flavors.

Another important flavor difference is that fresh wasabi can only be used if you grate it fresh, it has no heat otherwise because of the volatility of the isothiocyanates. As a result, it is traditionally grated for you at the table while you eat. There is no danger of wasabi paste losing its heat, so it does not have to be grated for you to eat it immediately.

Fresh wasabi and wasabi paste occupy different ends of the spectrum when it comes to pricing. Fresh wasabi is expensive because it is particularly difficult to cultivate. It takes a long time to grow to the point where it can be harvested and does not take readily to environments outside the Nagano Prefecture in Japan. Low supply causes high prices. All of the ingredients in wasabi paste are easier to grow and sell for lower prices.

Can you use fresh wasabi as a substitute for wasabi paste (and vice versa?)

Fresh wasabi can not only work as a stand-in for wasabi paste, many would argue that it is a definite upgrade. Of course, anyone who prefers wasabi paste’s harsher heat might argue otherwise.

Wasabi paste is the most common substitute for fresh wasabi. It does a good job of standing in for the more expensive condiment, but it is hotter and may obscure the subtle flavors of some foods.

Because of its higher cost, eat your fresh wasabi with premium sushi to get a more authentic experience. Wasabi paste may be used to accompany lower-cost meals, where it won’t matter as much if it hides the flavor of the ingredients.