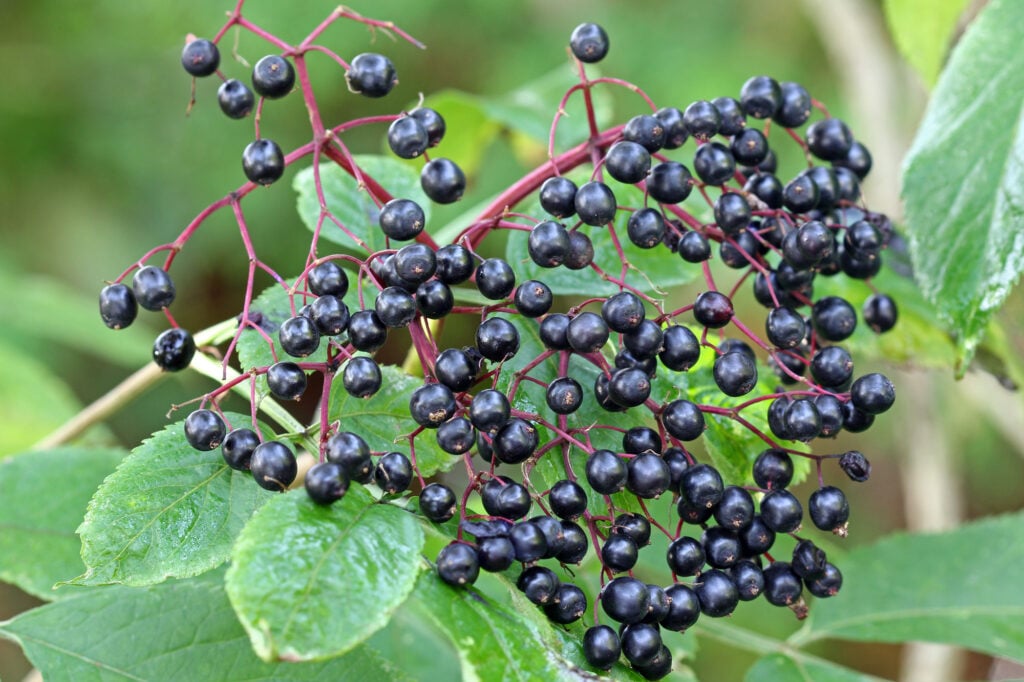 Elderberry is native to North America, Europe and Asia. Some varieties are believed to have been around as far back as 12,000 BCE. Elderberry seeds were found in Swiss dwellings from 2000 BCE.

Pliny the Elder mentioned elderberry’s health benefits in his writings as did Dioscorides. A few centuries later, the elderberry would be praised by Nicholas Culpeper and John Gerard.

The genus name comes from a Greek word, sambuca. It would eventually become the Latin word sambucus. The word comes from sackbut, which is a musical instrument that is believed to have been made with elder wood. The common English name comes from an Anglo-Saxon word for fire,

It is sometimes stated that red elderberries are not edible. They can be eaten safely, but the fruit must be deseeded and cooked first. Because of this, it is easier to use them for their non-culinary applications.

Elderberry plants have a long history in Western Europe. There has been a considerable amount of superstition surrounding elder trees. The Irish believed them to be sacred while the English and Germans claimed that they would bring ghosts into a home. Scots believed elder trees protected homes from evil. In the Middle Ages, some believed that elder leaves could repel witches while the burning wood could be used to identify them. Some of the many superstitions were still around in the 20th century, such as the belief that the wood should not be burned or used to make furniture.

Elderberries were at one point added to bad wine to disguise its quality.

Elderberry played a major role in Native American medicine. Internally, it was taken to induce vomiting and to act as a diuretic. Europeans used elderberry extracts to alleviate cold symptoms.

There are three main elderberry varieties:

he Sambucus canadensis is generally considered to be the best of the three with regard to using the berry as food.

Elderberries are extremely tart and that tartness is accompanied by an astringent bitterness. They taste better cooked than raw, and that’s a good thing as when eaten raw they can cause severe discomfort (see Health Concerns below).

Elderberries have long been used to improve health. Elderberries are beneficial because they contain nutrients like:

According to researchers, you can use elderberry to treat or prevent any of these health problems:

The bark, root, and leaves of the elderberry plant are considered toxic. The plant contains small amounts of cyanogenic glycosides (cyanide) that can cause illness if eaten over time.

The seeds in the elderberries also contain cyanogenic glycosides, but when cooked the glycosides are destroyed. Boil the elderberries prior to use to alleviate any issue. It’s recommended to not eat elderberries raw. Eating raw elderberries can cause nausea, diarrhea, vomiting, and other discomfort. Eating too many raw can also cause a toxic buildup over time that can lead to more severe symptoms.