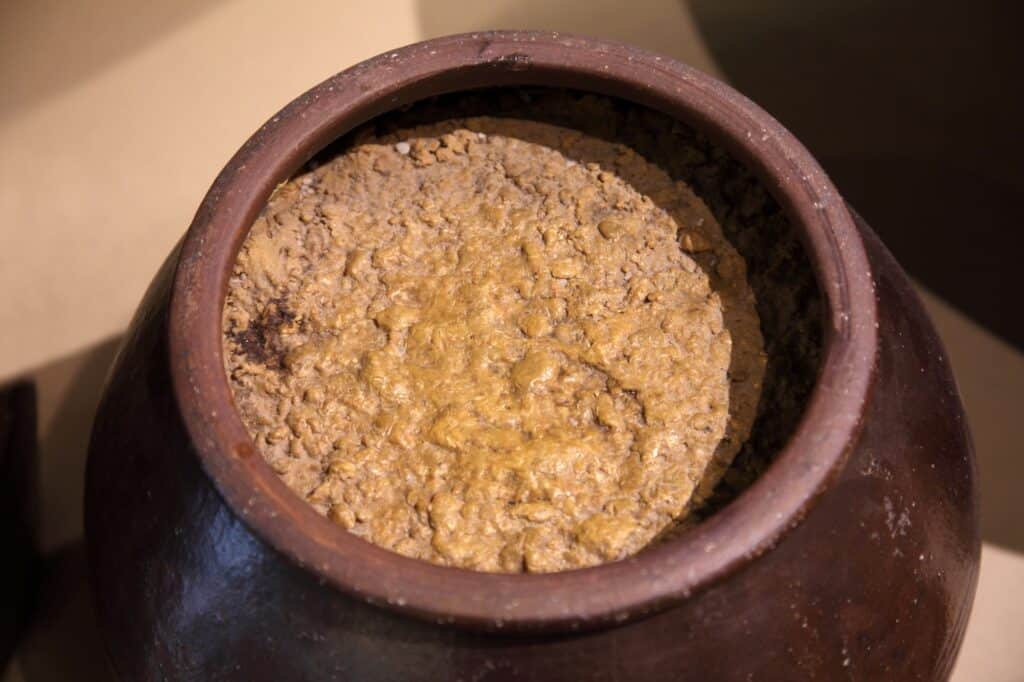 Doenjang is a Korean seasoning paste consisting mostly of fermented soybeans. Korea has had a long history with soybeans. According to some sources, it has been in use there for about 4,000 years even though the earliest document connecting Korea with soybeans is from 544 CE.

Because of the vegetable-heavy Korean diet, protein deficiency has been a problem there for much of the country’s history. Soy products like doenjang helped to prevent or remedy the problem.

The Koreans have been fermenting soybeans for over 2,000 years according to some sources. There is evidence that the Koreans were the first to ferment soybeans, and some Korean sources claim that soy sauce originated in Korea and made its way to other parts of Asia.

There is evidence of the trade in soybeans between Japan and Korea going on since about the third century CE indicating that fermented soybeans may have been exported from Korea to Japan. A Chinese document from the same period mentions Koreans and their fermented soybeans. Korean murals from the following century show the earthenware containers — called jangdoks — in which doenjang was fermented.

Doenjang begins with a block of dried soybeans called meju. It is the main raw material for Korean condiments like cheonggukjang, kanjang and gochujang along with doenjang.

Doenjang is listed as being among the items prepared for the wedding ceremony of Sinmun of Silla in 683.

A book from 1613 called Dongui Bogam was an important book in the field of traditional Korean medicine and contained the first descriptions of doenjang’s medicinal applications.

There are several different kinds of doenjang with different flavor profiles. In general, they are intensely savory. The breakdown of the soybean by fermentation gives the soybean paste a rich, umami flavor profile. It has the same flavor that has made soy sauce a popular ingredient. Doesjang’s color and much of its flavor are due to the Maillard reaction, the same chemical reaction that enhances the flavor of browned food.

Doenjang made in a factory with modern methods has a sweeter flavor than doenjang made with the traditional methods.

Doenjang’s reputation as a healthy food is because it contains nutrients like:

If you consume doenjang regularly, you may have an advantage when it comes to treating or preventing health issues like:

Doenjang has a significant amount of salt per serving. The high salt content means that it can be risky to consume for people with high blood pressure and other conditions that may be worsened by a diet with too much salt.

Doenjang is commonly used for different kinds of soup in Korea. You can use it as a soup base similar to miso or bouillon cubes. It can also be used in seafood stews, dipping sauces and stir-fried vegetable dishes.