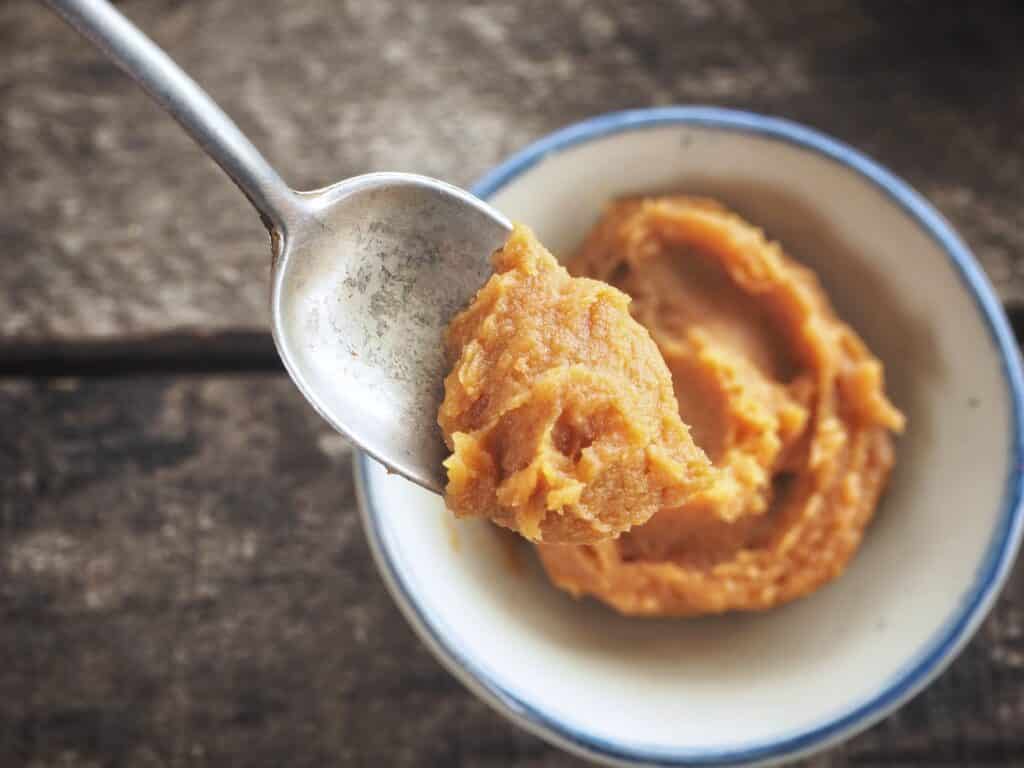 Doenjang and miso are forms of fermented soybean paste from different parts of Asia. They can be interchangeable but not always. Learn more about how they differ in the SPICEography Showdown below.

How does doenjang differ from miso?

Doenjang and miso come from different locations. Doenjang is a Korean condiment while miso is Japanese.

Even though they share the same main ingredient, the other components are different and they are processed differently. Traditional doenjang is made with soybeans, salt, and water. Miso is made with rice or barley and a starter culture called koji. With doenjang, the soybeans are fermented from the beginning of the process; with miso, the fermentation process begins with the grain and then the soybeans are incorporated.

Keep in mind that commercial versions of doenjang are often made with the koji and rice method just like miso, so the differences above won’t apply. In addition to all this, the minimum time for fermenting traditional doenjang is six weeks while miso can be made in as short a time as a week.

There is only one kind of traditional doenjang. Generally, it is a deep brown color with a consistency similar to that of chunky peanut butter. There are different kinds of miso, each of which has a different appearance. There is white, red and black miso. The consistency of miso is usually relatively smooth.

Doenjang and miso have different flavor profiles, which is often the result of their different minimum fermentation times. Doenjang is salty and savory with the fermented umami taste similar to what you might get from a Parmesan cheese. Its flavor profile is complex and pungent. In comparison, miso is milder and sweeter though it does have some of the same fermented umami properties. While it can be aged for years and some versions do have complex flavor profiles, most are relatively simple and mild.

Doenjang can work as a miso substitute, but it works best if you are replacing a higher quality, more flavorful miso. In general, you should expect a sharper and more intense flavor in the dish if you use doenjang as a substitute.

In comparison, miso will tend to tone down the flavors in a dish if you use it in place of doenjang. It can still work as a substitute, especially if you want milder flavors; however, it will not deliver an identical flavor profile. Because its flavor profile is more restrained, you won’t get the pungent intensity of doenjang.

Outside of emergency substitutions, you will want to use doenjang in dishes that require it specifically. In other words, use doenjang in Korean and Korean-influenced cooking. It is an important element in popular Korean soups and stews like doenjang jjigae and doenjang guk.

It is also an important ingredient in ssamjang paste, which is a dipping sauce. It makes a good stir-fry sauce for vegetables as well and can provide a savory flavor note in salad dressings. In Western applications, doenjang makes a great addition to marinades as a substitute for soy sauce.

Miso is best reserved for traditional Japanese applications like miso broth, which is the only traditional application familiar to most Westerners. Depending on the kind of miso, you can use it as a stir-fry sauce for greens, in glazes or marinades.