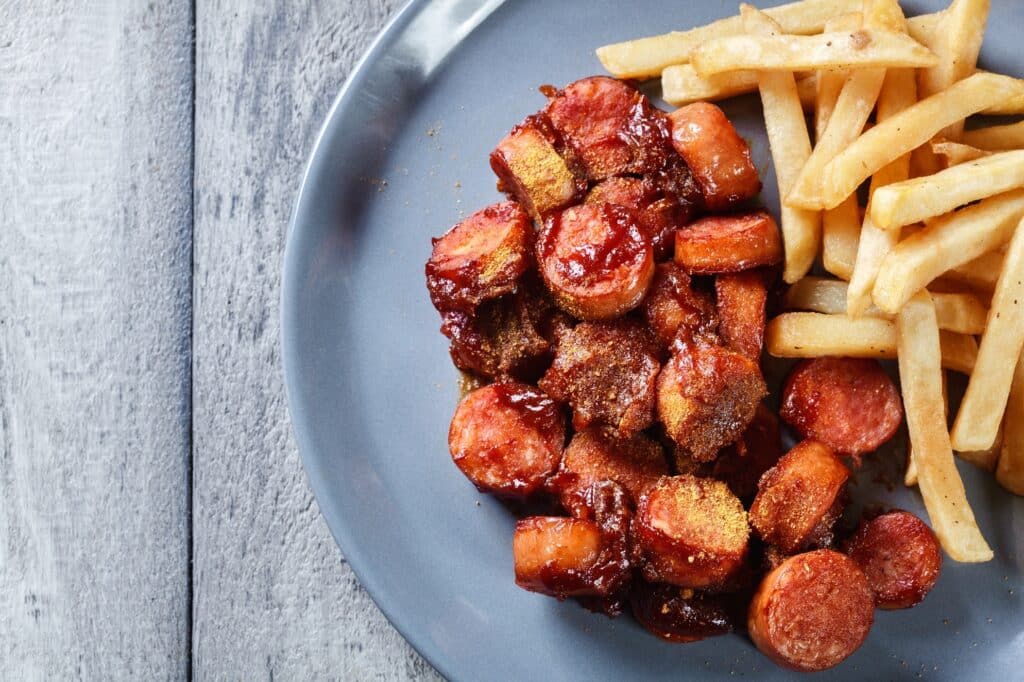 Some restaurants will put their own twist on currywurst sauce, but the formula is generally some combination of a tomato-based sauce and curry powder. The original version is also said to have included Worcestershire sauce and other seasonings.

Currywurst was invented in Berlin. The legend of currywurst began in 1949 when Herta Heuwer — a street food vendor— came up with currywurst sauce. Berlin was still under the control of the Allies after World War 2. Heuwer is said to have traded for the supplies with some British soldiers. They had provided her with curry powder and ketchup, among other ingredients. She smothered sliced fried sausage with it and thus was born the currywurst.

The addition of the new and exotic ingredients to a familiar German ingredient proved to be a hit. The dish was quickly popular and began selling rapidly from her little street-side snack stand. Some reports state that she was selling as many as 10,000 a week at one point. She was soon able to move her business to a permanent building that was still operating well into the 1970s. While she was widely copied by other purveyors of street food, she kept the original recipe secret.

There are claims by some that the currywurst was invented years before Heuwer’s version. Hamburg and the Ruhr region have each laid claim to being the birthplace of currywurst even though Heuwer patented her version of the currywurst sauce in 1959. She called it Chillup.

Currywurst continues to be a popular street food that is consumed all over Germany, not just in the city from which it came. Some sources estimate that more than 800 million currywursts are eaten in Germany annually.

The flavor of currywurst sauce varies depending on the recipe but the different versions all aim for the same kind of mildly spicy, savory and tart blend. Some may use a range of ingredients including diced onions and most include Worcestershire Sauce. There is also a good bit of sweetness as many recipes require either ketchup or added sugar or both. The currywurst sauce flavor is similar to that of a tomato-based barbecue sauce without the smoky note.

Currywurst sauce is not a good source of any nutrients but according to some manufacturers, the condiment can contain traces of some important ones. Nutrients that may be found in some brands of currywurst sauce include:

Currywurst sauce contains a sizable chunk of your recommended daily sugar and sodium. It should be consumed in moderation especially if you suffer from high blood pressure or are at a high risk of developing diabetes.

Currywurst sauce is used only in the currywurst dish where it is used to smother bratwurst.