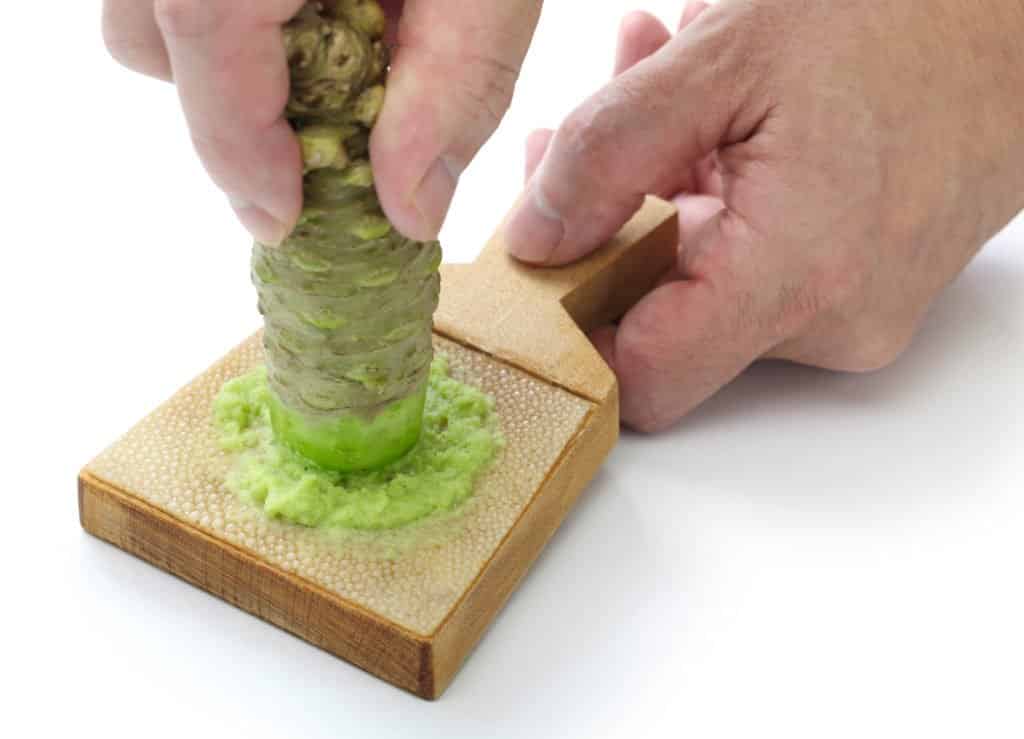 If you are going to purchase and use wasabi, remember that there are two varieties: The imitation wasabi that you see in the West and the true wasabi rhizome used in Japan. The wasabi rhizome may be grated and used but that is rare outside of Japan. It is very difficult to grow, which makes it expensive. The different forms of wasabi are similar in flavor and appearance but not all of their properties are identical. Western wasabi is made with horseradish, green food coloring, and other ingredients while true Japanese wasabi is made with grated wasabi root.

You should start out by peeling the rhizome carefully using the same method that you would use to peel ginger. Once it has been peeled, use a sharkskin grater to grate it. Sharkskin graters are called oroshigane. The oroshigane is the traditional tool used to prepare wasabi in Japan.

Grated wasabi should sit for about 10 minutes before serving to allow the chemical reaction behind its flavor to develop properly. The flavor comes from isothiocyanates that react with water and with each other to create the distinctive sinus-clearing profile. If you are using powdered wasabi, reconstitute it with a little water to get a paste similar to that made with true wasabi.

You should store jars of wasabi paste exactly like prepared horseradish, which means you should keep them in a cool and dark place. Heat and light can degrade their flavor. Whole pieces of true wasabi should be wrapped in moist paper towels and stored in the refrigerator. Wasabi powder should be stored in an airtight container and kept away from moisture until you are ready to use it.

Do use wasabi for more than just sushi.

Wasabi is associated mainly with certain Japanese foods but its flavors are versatile and work in Western dishes as well. It can function in a similar way to horseradish and makes a great addition to mashed potatoes as well as to seafood. Add it to mayonnaise to create a spicy version of that condiment that you can pair with fries or use to make potato salad.

Do learn the differences between Western wasabi and true wasabi.

Western wasabi does not have the volatility of true wasabi — it does not become stale as quickly after you expose it to air. You can visually distinguish between the two by the fact that Western wasabi will be a uniform green while the wasabi rhizome is mostly green with a little yellow. Western wasabi has the heat but not the distinctly earthy and vegetable notes of true wasabi.

Don’t expose the rhizome to air.

Don’t expose wasabi to air for too long. Unlike western style wasabi, true wasabi loses its flavor very quickly. All it needs is about 15 minutes of exposure to air and it becomes worthless as a condiment. However, all is not lost as you can simply grate a little more of the rhizome into the flavorless wasabi to refresh the flavor.

The two main condiments that accompany sushi or sashimi in Japanese restaurants are soy sauce and wasabi. You are meant to enjoy their flavors separately even though it might seem more efficient to simply combine the two condiments in the same bowl. Note that while this is a common practice among some westerners (and many Japanese), it is viewed as gauche in Japanese culture.