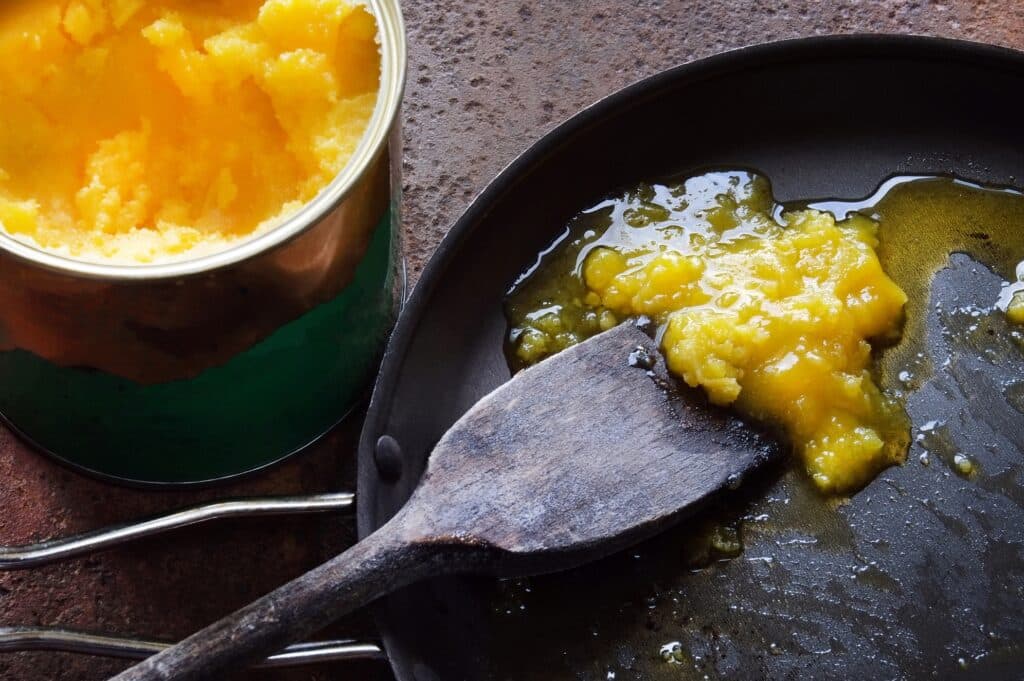 Ghee is butterfat that has been separated from the other elements in whole butter. While some aspects of butter’s richness and flavor do remain, its character is significantly changed. It is widely used in Certain Indian dishes and is a versatile cooking fat with a range of applications that go beyond foods from the subcontinent. Below are some dos and don’ts that can help you to get the best results from cooking with ghee.

Do use ghee for cooking at high temperatures.

Ghee has a high smoke point. The smoke point is the temperature at which heated oil puts out smoke, and it’s different for each cooking fat. Ghee’s smoke point is high enough that it can be heated to well over 450 degrees Fahrenheit (232.22 °C) without smoking, which indicates that it is burning and generating toxic compounds. The high smoke point is why ghee is ideal for fast, hot stir-fries and rapid-cooking Indian breads like parathas.

Because the milk solids and water have been removed from ghee, you can store it at room temperature. Unlike regular butter, ghee does not need refrigeration; however, you will have to store it correctly to benefit from this shelf stability.

Moisture is one of the factors that will keep ghee from lasting as long as possible, so you will want to keep it in an airtight container so that humid conditions do not affect it.

Do make ghee yourself.

Ghee is available in some standard Western grocery stores and is a staple ingredient in stores that cater to Indian communities outside of India; however, commercial ghee can be quite expensive. The high cost is especially noticeable when you compare it to the cost of the raw material: butter.

To cut costs, you can make ghee at home. The process of making ghee involves heating whole butter over low heat until the water evaporates and the milk solids precipitate out of it. At that point, you can remove the milk solids and store the pure ghee properly.

Do use ghee in North Indian dishes.

Ghee is a staple in North Indian dishes but is not as commonly used in South India, which prefers coconut oil. You will need it if you are planning to make parathas, paneer or any of the numerous other dishes popular in the northern part of the subcontinent. It is essential if you want to get the authentic flavor profile of this region’s cuisine.

Do use ghee in Hollandaise sauce and similar sauces.

Ghee is a key ingredient in Indian recipes but it is so much more versatile than that. You can use it in Western classics as well. It is great for making Hollandaise sauce and other traditional French sauces. Hollandaise sauce is less likely to curdle if you replace the whole butter in the traditional recipe with ghee. If you are following the Paleo or Whole30 diets, this will ensure that the sauces remain compliant.

Don’t avoid ghee if you are lactose intolerant.

While you might be tempted to stay away from it because ghee is often described as a type of clarified butter, remember that the milk solids have been removed from it. The solids are where the lactose is contained so properly-made ghee should be safe for people with lactose intolerance to consume.