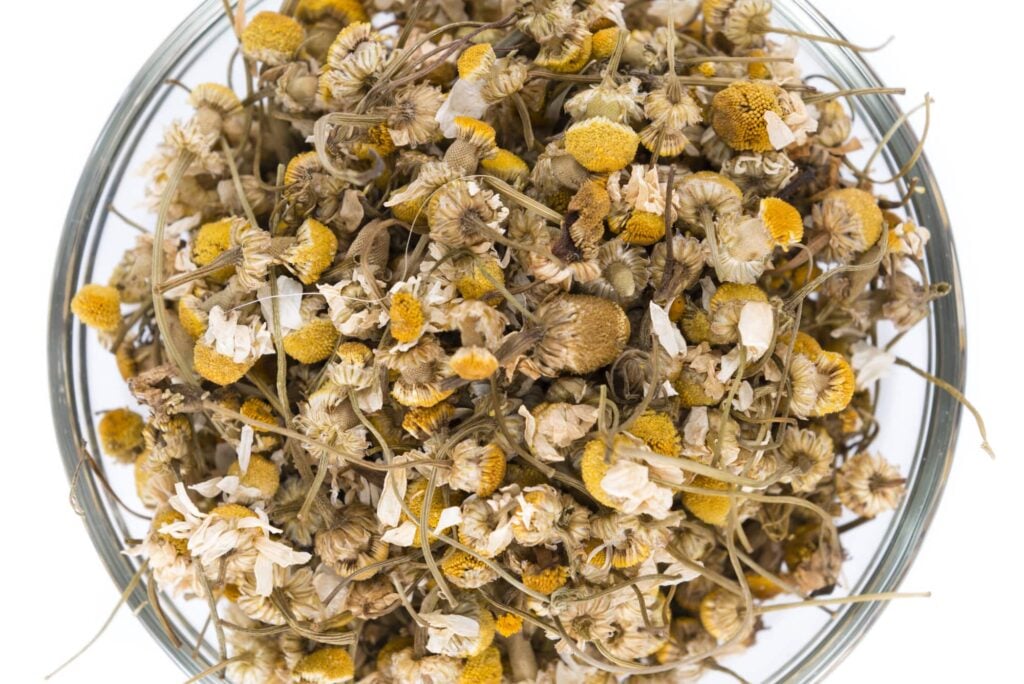 Chamomile is famous for its mild sedative properties and light apple-like fragrance and flavor. It belongs to the daisy family, and humans have used it since ancient times. While the plants come from Europe, you will also find them throughout the New World. Chamomile is relatively easy to prepare and versatile once you understand its properties and how to use it. Below we look at the most important factors to keep in mind when using this herb.

Do look for whole blossoms when buying dried chamomile.

It is normal for the blossoms to crumble to some extent, but you should see mostly whole flowers with some leaves; it should not consist entirely of fragments and crumbs.

How you store chamomile will differ depending on whether you are using the fresh herb or dried. Store fresh chamomile the way you would store fresh cut flowers — by placing the stems upright in a container of water. You can store the fresh blossoms in the freezer. A tall container like jar or drinking glass should work well.

Treat dried chamomile like any other dried culinary herb — store it in an airtight container away from light. It is possible to store chamomile that you have already steeped as well. Store your leftover chamomile tea in the refrigerator. It can last for up to a week in a closed pitcher.

Most people know chamomile as a tea herb, but did you know that you can eat it like any other culinary herb as well? Ways to use chamomile flowers include mixing them into oatmeal and other cereals. Fresh chamomile blossoms and leaves are also enjoyable in salads. The leaves are bitter, so use them sparingly.

Chamomile’s sweetness makes it well-suited for dessert preparations such as ice cream and custards. It can make a great baking ingredient that works in cakes and other pastries.

Do learn to differentiate between the two chamomile varieties.

Do learn how to dry fresh chamomile blossoms.

The method is essentially the same as that for other culinary herbs. Simply hang a bunch of the flowers by the stems in a dry, dark location with moving air. Store them until they are dry to the point of being crumbly.

Do use chamomile in cocktails.

Chamomile’s benefits in beverages are not limited to tea, its apple flavor can work well in alcoholic drinks as well. Consider the fact that chamomile is a flavoring for Spanish sherry and a certain type of wheat beer. Alternatively, you can use it to flavor a simple syrup for your sweet drinks or make an herbal wine.

For best results, avoid steeping it for longer than five minutes.

Don’t consume chamomile if you have a ragweed allergy.

Chamomile tea can cause an allergic reaction in people allergic to ragweed.