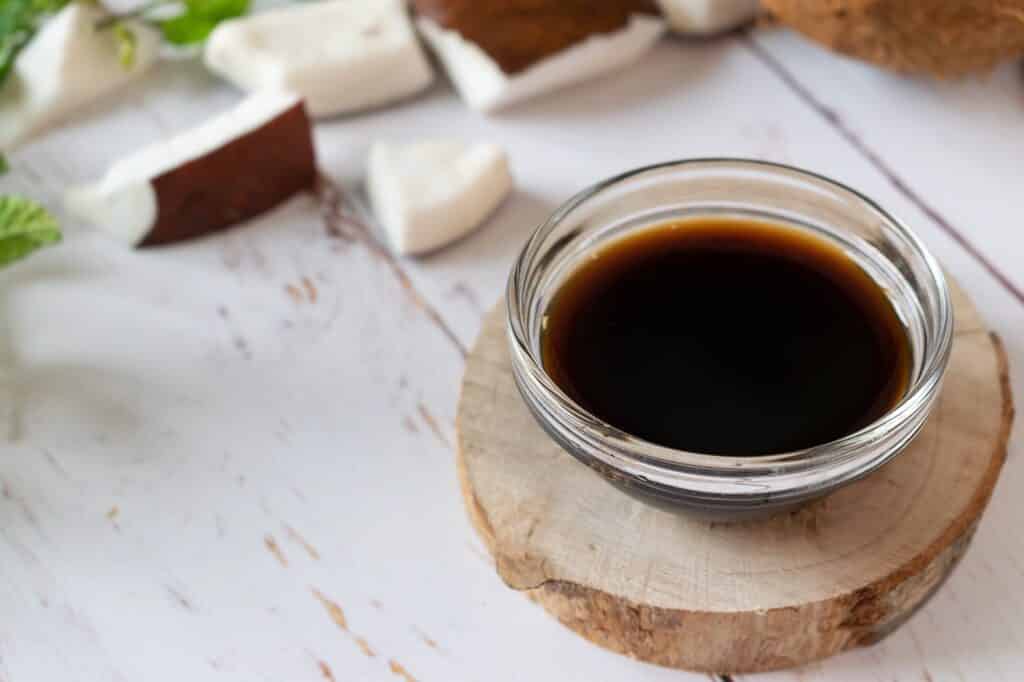 Coconut aminos seasoning sauce is a sauce made from the sap or nectar of coconut trees. This is the same sap that is harvested to make coconut sugar and coconut vinegar. The sap has been harvested and used in cooking for centuries.

Coconut sap is harvested with the use of bamboo tubes to collect the sap that comes from the coconut blossoms. The fresh sap is believed to be highly nutritious, but it is fermented when used in coconut aminos. Coconut aminos seasoning is made by fermenting coconut sap with salt.

The production of coconut aminos sauce is associated mostly with the Philippines.

Coconut aminos sauce has recently become a trendy product due to the rise of fad diets like the paleo diet and The Whole 30.

Contrary to what you might believe because of the name, the coconut aminos condiment does not taste like coconut. Coconut aminos sauce contains an amino acid called glutamate, which gives the sauce a savory flavor profile. Glutamate is also what gives soy sauce and MSG their umami notes. Unlike soy sauce or MSG, coconut aminos sauce has a slight sweetness in addition to being a source of umami. Its sweetness is noticeable enough that it may be necessary to adjust the levels of other sweeteners in some recipes.

Although its health benefits are one of its main selling points, the coconut aminos condiment is not particularly nutritious. The claims about its health benefits are not well-researched. It does contain trace amounts of certain vitamins and minerals as well as amino acids but not enough of them for it to be considered a healthy product because of them.

While you won’t get many nutrients from coconut aminos seasoning sauce, it may still help to treat or prevent health problems.

There are fears that the soy in products like soy sauce, can cause health problems ranging from thyroid issues to breast cancer. If you are a heavy soy sauce user, replacing it with coconut aminos may lower the risk since it contains no soy. Using coconut aminos as a soy sauce substitute.

Coconut aminos may have considerably less salt than soy sauce, but it is still a high-sodium condiment. As such, it can increase your risk of heart disease and strokes.

You can use coconut aminos seasoning liquid in all the recipes that call for soy sauce or tamari. It is a good table condiment for a variety of Asian dishes including fried rice, stir-fries, and noodle dishes. It works as a part of marinades, sauces and salad dressings. Its versatility extends to other foods including popcorn where it is sometimes sprinkled on as a seasoning.