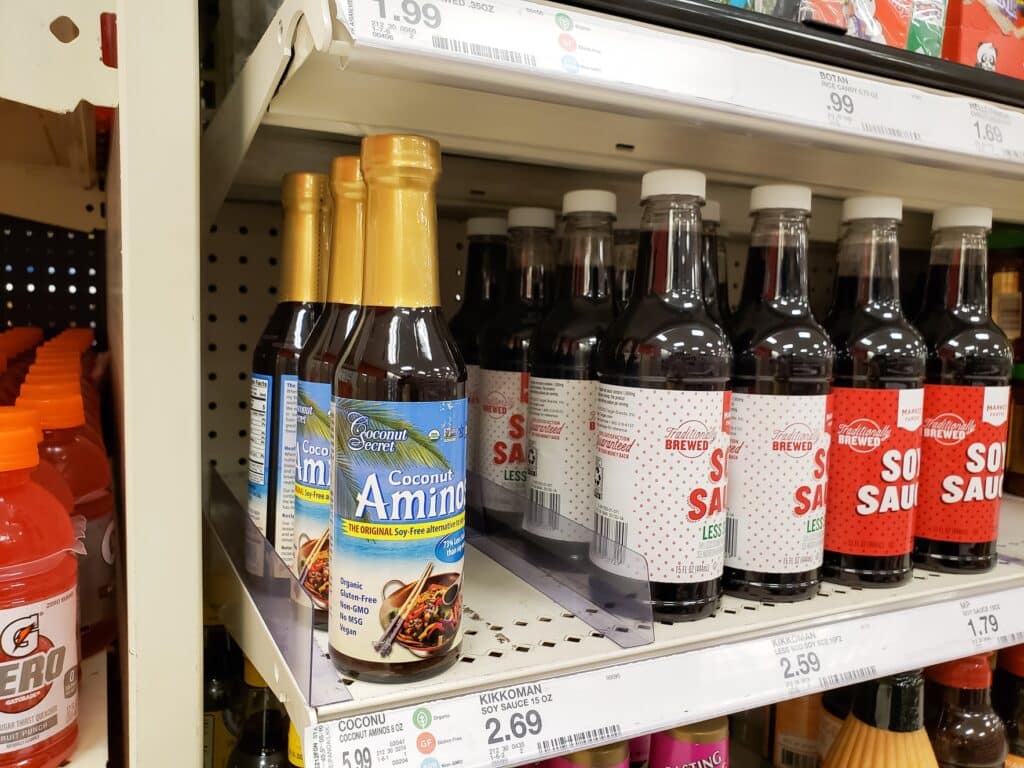 Coconut aminos and soy sauce are popular liquid seasoning sauces. They look and taste a lot alike but are actually two different condiments. While they do share some characteristics, It is a good idea to understand what each has to offer before you pick one or the other. The SPICEography Showdown compares their properties.

How does coconut aminos sauce differ from soy sauce?

The fact that the two sauces are made with different ingredients results in them having different flavors. Coconut aminos seasoning sauce has a relatively mild umami flavor with moderate saltiness and a hint of sweetness. There are many different kinds of soy sauce and each has its own balance of flavor and consistency, but the most common soy sauces will be more intensely savory and salty than coconut aminos.

Coconut aminos will have a thinner and more translucent appearance compared to soy sauce, which will usually be more opaque. Light soy sauce can be a little thicker while tamari and other darker soy sauces will be a lot thicker.

Soy sauce does contain more major nutrients than coconut aminos. You can get vitamins like vitamins B2 and B3 from it along with minerals like manganese and iron.

Coconut aminos seasoning can work as a soy sauce substitute if you are looking for a low-sodium condiment. It is also a great alternative if you are trying to avoid gluten or soy. If you want something that tastes exactly like soy sauce, it won’t be ideal since it lacks the strong umami character and is slightly sweet.

From a flavor and nutritional standpoint, soy sauce might be an improvement on coconut aminos; however, it won’t be an ideal substitute because of how much salt it contains. You will need to use less of it. It won’t be a good substitute at all for anyone trying to avoid wheat and soy.

Use coconut aminos in Asian dishes where you might otherwise use soy sauce. Because it doesn’t have the same kind of strong distinctive flavor, it is easier to use in Western dishes as a salt substitute. Use it as a marinade for grilled meats, in salad dressings and as a salt replacement at the table.

Soy sauce is best reserved for Asian dishes that depend on it for its flavor. It is essential for fried rice and numerous stir-fried dishes. It is also an important table condiment for Chinese and Japanese food.