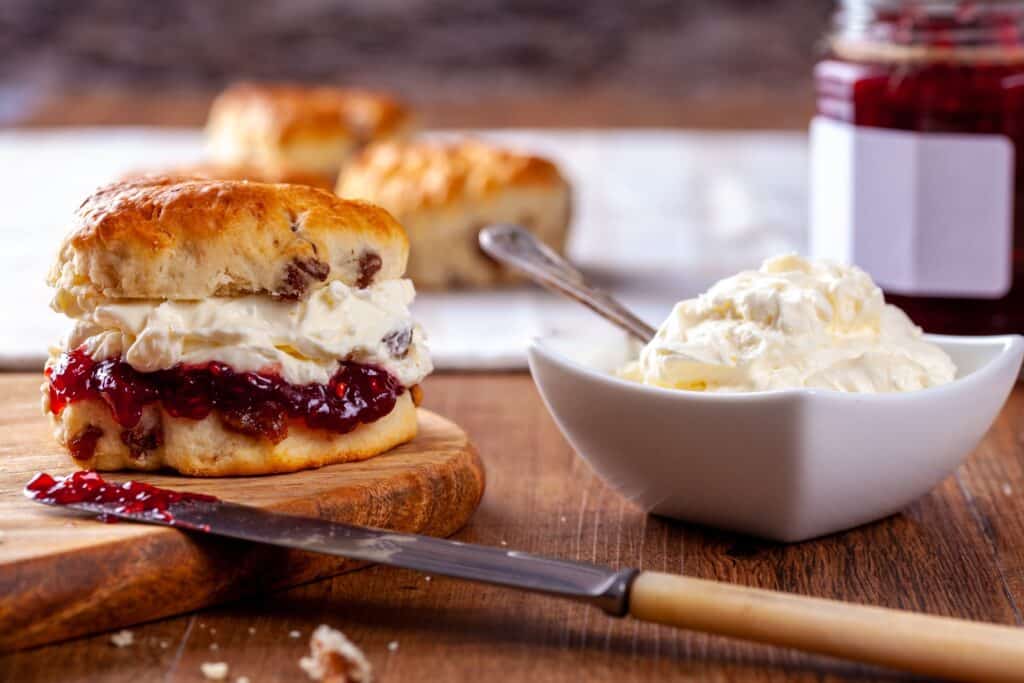 Clotted cream is a traditional British spread that is believed to have come from England’s southwest corner. Other names for clotted cream include Devon or Cornish cream because Devon and Cornwall are the two places in the UK that are most famous for it.

Clotted cream may have first come to the UK from Phoenicia two millennia ago. According to legend, it came from Phoenicians seeking tin. The part of the Middle East that was once Phoenicia is now several countries, including Syria and Lebanon. In that part of the world, the cream from buffalo milk was clotted to preserve it. Clotted cream is mostly butterfat with the water removed. By removing the water, the environment needed for the organisms that cause spoilage is removed, so the cream lasts for longer.

The traditional method for clotting cream involves separating the cream from the milk, baking it until it acquires a crust, then cooling it down rapidly.

Cream tea is a tradition associated with clotted cream. The earliest mention of the cream tea is from the 11th century where it is believed to have originated in Devon at Tavistock Abbey. Clotted cream was then served on bread and paired with strawberry preserves. Scones wouldn’t show up until the 16th century and may be of Dutch or Scottish origin.

Clotted cream has an extremely thick consistency, mainly because it contains even more butterfat than heavy cream. The main flavor is rich, buttery dairy cream with a little nuttiness that it gets from being caramelized during the baking process.

Even though it is not widely considered to be a healthy food item, clotted cream does have a few nutritional benefits. The compounds that provide those benefits include:

By consuming clotted cream in moderation, you may be able to treat or prevent health problems like:

Clotted cream is a high-calorie food item, which means that you will need to exercise moderation when consuming it if you are trying to lose weight. The question of whether saturated fat contributes to high levels of cholesterol and heart disease risk is up for debate, but many people believe that it does.

The most famous use for clotted cream is for cream teas, a tradition from Devon and Cornwall. The cream tea tradition has also made its way to Australia via immigrants from the UK. In Devon and Cornwall, clotted cream is accompanied by jam and served on basic scones or the local bun called Devonshire splits or Chudleighs. The order of the jam and the clotted cream differs in each location, with Devonians preferring to spread the cream on first with the jam on top; the Cornish switch them around and apply the jam before adding the cream.