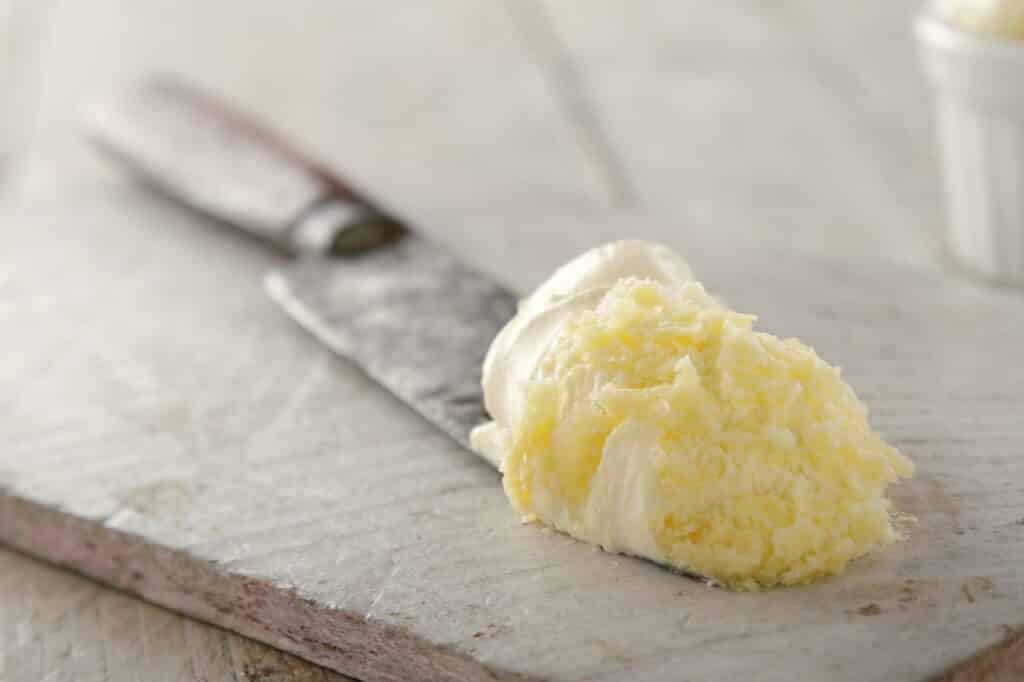 Clotted cream and butter are two similar dairy products that on paper may seem to be interchangeable. They are both rich in milkfat, which is sometimes called butterfat. Both are used as spreads and can be valuable for adding richness to foods. That said, there are some key differences that you should keep in mind if you plan to use one or both. We compare them in the SPICEography Showdown below.

How does clotted cream differ from butter?

Clotted cream and butter are two different dairy products with differing compositions. Clotted cream is a rich cream that can have about 60 percent milkfat. Butter has a higher milkfat percentage at about 80 percent.

The different compositions of clotted cream and butter mean that they also differ in terms of their flavor profiles. Clotted cream’s flavor is intensely rich and milky, with a nutty background note that results from the fact that it has been baked. Because it contains more milkfat, butter is richer but not as milky and creamy. Dependence on the kind of butter, it can also be a lot saltier than clotted cream.

Clotted cream and butter do not look much alike, though they both get their color from beta-carotene. Clotted cream is a very pale yellow. Butter is typically a bright yellow and can be an intensely bright yellow.

Clotted cream won’t be a good butter substitute in most applications. The water and milk solids to milkfat ratio makes it a poor substitute in baked goods recipes. Most of these recipes require pure fat without all the moisture and milk. It won’t be a good butter alternative on bread and toast, either. Clotted cream sits as a heavy layer on bread instead of being soaked up like melted butter.

Butter won’t be a good substitute for clotted cream because of its high fat content and relatively low milk solid and water content. You can’t lay on a thick layer of butter on a warm scone or Devonshire split because it will melt and be absorbed. While there are positives to this, it is quite a different effect than you would get from using clotted cream.

Similarly, you wouldn’t use butter to garnish fruit, since the butter wouldn’t give you the fluffy creaminess of clotted cream.

The differences in the composition of these two dairy products mean that you are limited in how you can use each. Clotted cream can be used to add richness to pan sauces and soups, and you can use it as a garnish for baked goods and fruit. The classic way is to use it as a spread for scones or Devonshire splits, a type of roll.

Butter is one of the most versatile ingredients in the world, playing major roles in European and Indian cuisines. Along with adding richness to a vast range of baked goods, butter is used throughout French cuisine and for everything from mashed potatoes to basting steaks. It can be used for light frying, and you can clarify it to make ghee or clarified butter.