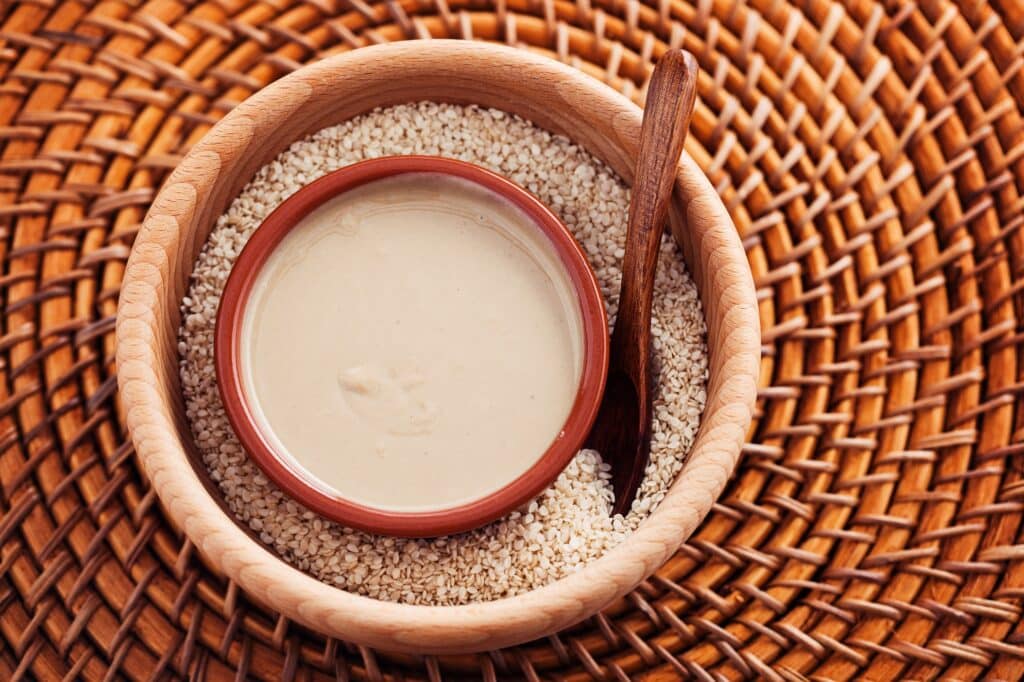 Chinese sesame paste and tahini are both made by grinding sesame seeds, so you could be forgiven for thinking that they are interchangeable. But they are not. They have a lot in common but are not identical, which means that you will need to learn a little about each of them if you have to choose between them for a particular application. Here is a look at how they compare in this SPICEography Showdown.

How does Chinese sesame paste differ from tahini?

The differences in processing result in Chinese sesame paste having a different flavor from tahini. The toasted seeds benefit from what is called the Maillard reaction. This is the chemical reaction that occurs when you brown food and that is responsible for the distinctive taste of that food. The intensely savory nuttiness of Chinese sesame paste is the result of that browning.

Because the sesame seeds used for tahini are often not browned, you might not get the same kind of toasted flavor. The tahini will still be nutty but not to the degree that would get from Chinese sesame paste. Along with tahini’s milder flavor, it may give you a slightly bitter note.

Can you use Chinese sesame paste as a tahini substitute and vice versa?

Chinese sesame paste can be an effective replacement for tahini in some dishes. The flavor will be stronger and therefore more noticeable, but it will provide the texture that you want from tahini. In some cases, that stronger flavor will enhance dishes, but it may be an undesirable distraction in others. It has the potential to dominate milder flavors.

Similarly, you can use tahini as a Chinese sesame paste substitute in some dishes where its consistency is more important than its flavor. You probably won’t get the strong toasted Chinese sesame paste flavor, but you will get the richness. The subtlety of the tahini flavor may cause it to be hidden behind other flavors in a dish. You may also be able to get some of the toasted sesame seed flavor by adding some toasted sesame oil to your tahini.

Chinese sesame paste is best used in classic Chinese dishes like dan dan noodles and in any other dish where you want the rich nuttiness of roasted sesame seeds. It also works in salad dressings and as a substitute for peanut butter.

Tahini’s best-known application is as a source of richness and flavor in one of the most popular Middle Eastern dishes, hummus. It is also combined with garlic and lemon juice to make a dipping sauce that you can use on lamb and other meats as well as on fish.