Chili peppers have been a part of the human diet since 7500 BC with Christopher Columbus being the first European to encounter them. He was also the first to call them “peppers” because their taste was reminiscent of black pepper. Because of Columbus, South American chili peppers would spread around the world and become major elements in different cuisines.

The inventor of chili powder is disputed, what is clear is that it was invented in Texas. According to Chili historian Joe Cooper, the inventor was a German immigrant named William Gebhardt. In 1894, Gebhardt ran a café in New Braunfels, Texas. At this time, chili was a seasonal food since the peppers were only available after the summer harvest. Gebhardt solved the problem by importing chilies from Mexican farmers in bulk. This allowed him to serve chili throughout the year but the large amount of dried peppers he had to keep on hand posed a problem, so he started grinding them in a meat grinder. He would add oregano and cumin seeds to the chili peppers as well; he called the spice mix “Tampico Dust” at first but would later rebrand it to Gebhardt’s Eagle Chili Powder; it is still sold under that brand today. In 1896, he opened a factory to make and sell his chili powder. 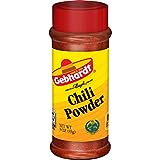 It is important to note that the widespread availability of Gebhardt’s chili powder is one of the reasons that Tex-Mex food became popular throughout the US. It made the essential spices available in places where they would have been difficult to find in the late 19th century.

Since Gebhardt’s original chili powder, there have been many other blends from different manufacturers. Each manufacturer uses their own proprietary recipe, which means that there is a great deal of variation in flavor among chili powders. The differences are especially evident with regard to the level of spice, though cayenne pepper – in some level – is often the chili used. Most blends contain ground cumin and have that spice’s earthy, nutty notes. Oregano is another common chili powder component and it brings herbaceous and spicy qualities to the mix.

Chili powder is a central ingredient in Tex-Mex food. You can find it flavoring the meat used to make tacos, burritos and enchiladas. Of course, it is also the primary seasoning in chili con carne. Aside from Tex-Mex recipes, chili powder is also widely used in barbecue dry rubs. Variations of chili powder can be found in Indian, Korean and Thai cuisine.