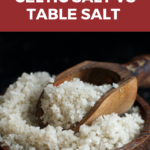 Celtic sea salt and table salt are found in many kitchens and serve the same fundamental purpose of adding flavor to food. Even though they both have salt in the name, they differ dramatically and should you can use each of them differently. We compare them in the SPICEography Showdown below.

How does Celtic sea salt differ from table salt?

Celtic sea salt comes from clay-lined salt ponds, which results in all of its most distinctive characteristics. Firstly, it is harvested in one specific location — Brittany — which is on the coast of France. It is gray due to minerals from the clay in the ponds, which also accounts for its other name: sel gris or gray salt.

Celtic sea salt retains seawater and is a moist salt. It is also manually harvested by workers called paludiers, who draw out the crystals. Maximum production of Celtic sea salt is low with only about 20 metric tons coming out of France each year. Celtic sea salt has a strikingly briny flavor profile. The labor involved in harvesting Celtic sea salt means that it is particularly expensive though not quite as expensive as another Breton salt: fleur de sel.

In comparison, table salt is mined. Its production is not limited to one particular part of the world; instead, it is produced by multiple countries on different continents with China and the United States being the world’s top two producers. Table salt is dry and often fortified with iodine. The flavor is merely salty with no brininess though some people can detect a hint of bitterness in iodized salt. The production of table salt is heavily industrialized with millions of metric tons mined annually.

Celtic sea salt can be used in place of table salt in almost every culinary preparation and is likely to be an upgrade in many of them. While it does have a strong oceanic flavor, that will not be an issue in most dishes; however, it might be in a few.

Celtic sea salt might not be a good table salt substitute in dishes with very mild flavor profiles. It works better as a finishing salt since it will not dissolve as quickly as table salt. Note that using Celtic sea salt in a dish will increase its cost significantly.

Table salt will not be a great alternative to Celtic salt in many dishes, partly because of the issue above with dissolving quickly. It is not as good a finishing salt as Celtic salt. Table salt will certainly not be ideal if a dish requires the strong brininess or the dramatic visual appeal of moist, gray salt crystals carefully sprinkled.

Despite their differences, both Celtic sea salt and table salt are chemically similar and taste mainly of salt. They can both serve as reasonable substitutes for each other if there are no alternatives.

Reserve Celtic sea salt for steak, salads and other dishes where this moist salt will improve the flavor profile and appearance. While you can use it to cook pasta or to season a stew, much of what sets it apart will be wasted in those applications. Given its cost, you should use it only when its properties will significantly enhance a dish.

Use table salt for dishes where all you need is a salt flavor. It is great for baking and for any recipe where the salt disappears into the background. It is also best if the dish requires a lot of salt since table salt is relatively inexpensive.