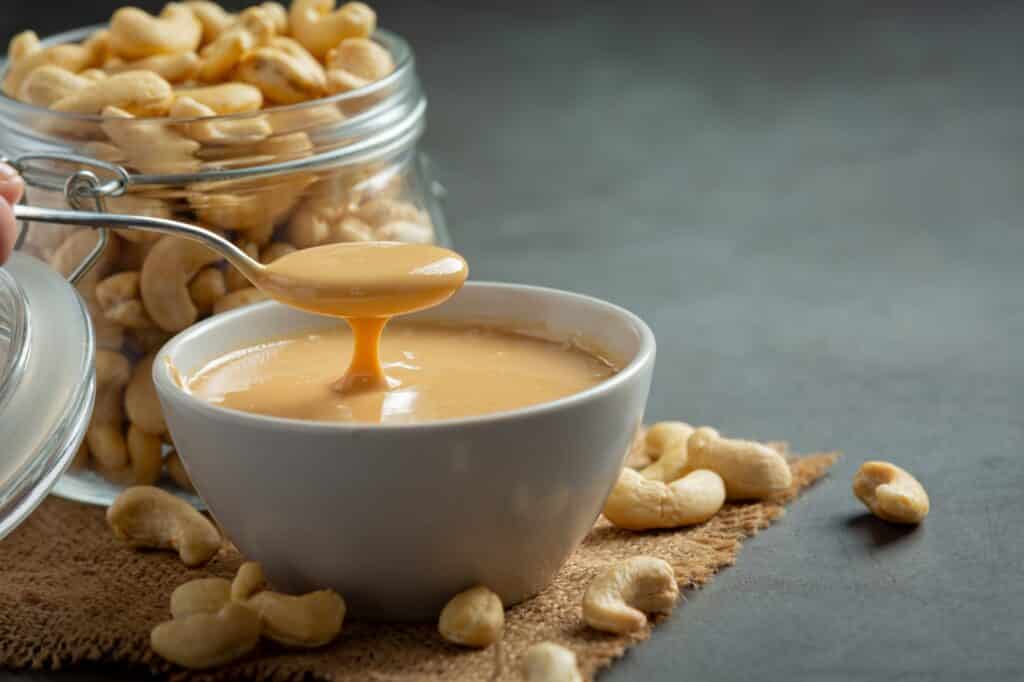 Your best bet: Make your own cashew butter

You can make cashew butter at home easily with only two ingredients: roasted cashew nuts and oil. You can add salt or a sweetener to taste, but those are optional. You will also need a food processor or blender. Grind the cashews with oil until they take on the creamy consistency of cashew butter.

Because it is the most familiar of all the nut butters, peanut butter is going to be one of your best options as a cashew butter substitute. Its flavor can be mild like that of cashew butter, and it has a similar texture. Peanut butter has a distinctive nutty flavor that works in most applications that require cashew butter. Nutritionally speaking, the two are a lot alike, since they contain many of the same vitamins and minerals. Peanut butter contains more vitamin E and higher concentrations of some B vitamins like niacin. It also provides more protein than cashew butter. Peanut butter is both easy to find all over the world and relatively affordable.

The downside of peanut butter is that it is a notorious allergen for some people.

In a pinch: Soy nut butter

Because it is made from soybeans, soy nut butter won’t trigger peanut or tree nut allergies. It is smooth and creamy like cashew butter and the flavor is also relatively neutral, so you can use it in the same kinds of preparations without too much of a difference in taste. Soy nut butter is highly nutritious and contains many of the nutrients that you would get from cashew butter.

One of the big downsides of soy butter is the difficulty of finding it. It’s not as readily available as other nut butters on this list.

Because it is considered to be one of the most nutritious nut butters, walnut butter is an excellent cashew butter substitute. It helps lower cholesterol — a benefit it shares with cashew butter — and is also a good source of omega-3 fatty acids, which means that it may be beneficial for heart health.

Walnut butter has a naturally bitter flavor profile, which means that it won’t be an ideal cashew butter substitute in everything. It is also not the easiest nut butter to find and tends to be expensive when it is available.