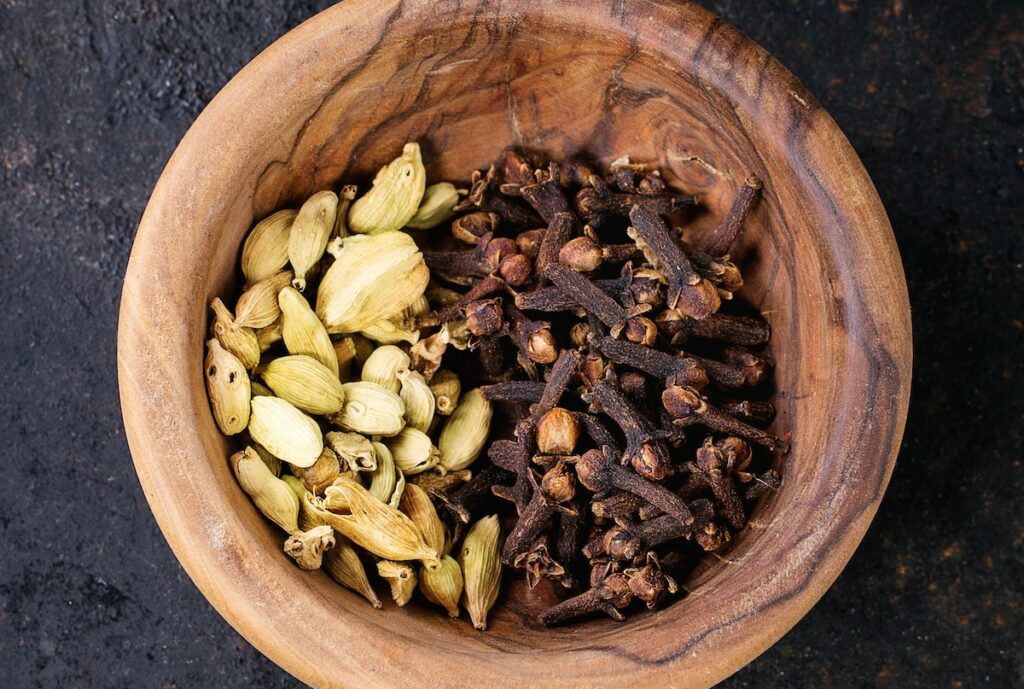 Cardamom and cloves often appear in the same dishes, and both have a reputation for assertive flavors. If you are trying to decide which is right for a particular dish, you will need to look closely at what is special about each of them. Let’s compare these two spices.

How do cardamom and cloves differ from each other?

Cardamom is the seed of a plant in the ginger family. It is native to India and used heavily in dishes from the subcontinent. Cardamom is one of the most expensive spices in the world due to the amount of work required to process it; its pods must be harvested and processed by hand.

Cloves are different from cardamom and most other spices in that they are not seeds; rather, they are the dried, unopened buds of a plant in the myrtle family. That family includes allspice and eucalyptus. Cloves are native to Indonesia. They are much less expensive than cardamom as the harvesting is not quite as labor intensive. The name for cloves originated with the French word for nail. The unopened buds have a wide end and a tapered stem that gives them a similar appearance to nails.

Can cardamom be used in place of cloves and vice versa?

Both spices are regularly used together in many of the same dishes, but their flavors are not very similar. Cardamom has a complex flavor incorporating herbal, citrus, and mint notes; cloves have a mildly bitter eucalyptus note with hints of pine and black pepper. That said, it is possible to make an effective cardamom substitute by pairing clove with cinnamon.

Cardamom will not make a good clove substitute except in the sense that it provides a pungency that works in both sweet and savory dishes. Swapping these spices out is unlikely to ruin a dish but will still dramatically alter its overall flavor profile.

Cardamom is a common ingredient in Indian spice blends like garam masala and Indian-influenced European spice blends like vadouvan. You can use cardamom to make your own version of these spice blends. Its use in savory preparations is more common in India and the Middle East. In European cooking, cardamom is more likely to be used in cookies as well as bread and other baked goods. Use it in your apple pie filling or Swedish sweet bread.

The compound responsible for much of the flavor of cloves is called eugenol. Eugenol is found in several other spices, like allspice and cinnamon. Cloves work best in dishes that feature these other spices. It also works well in fatty and strongly-flavored meats; for example, you can use cloves in ham and venison. It pairs well with acidic notes and is a popular addition to pickles. Cardamom is particularly enjoyable when combined with nutmeg and cinnamon.