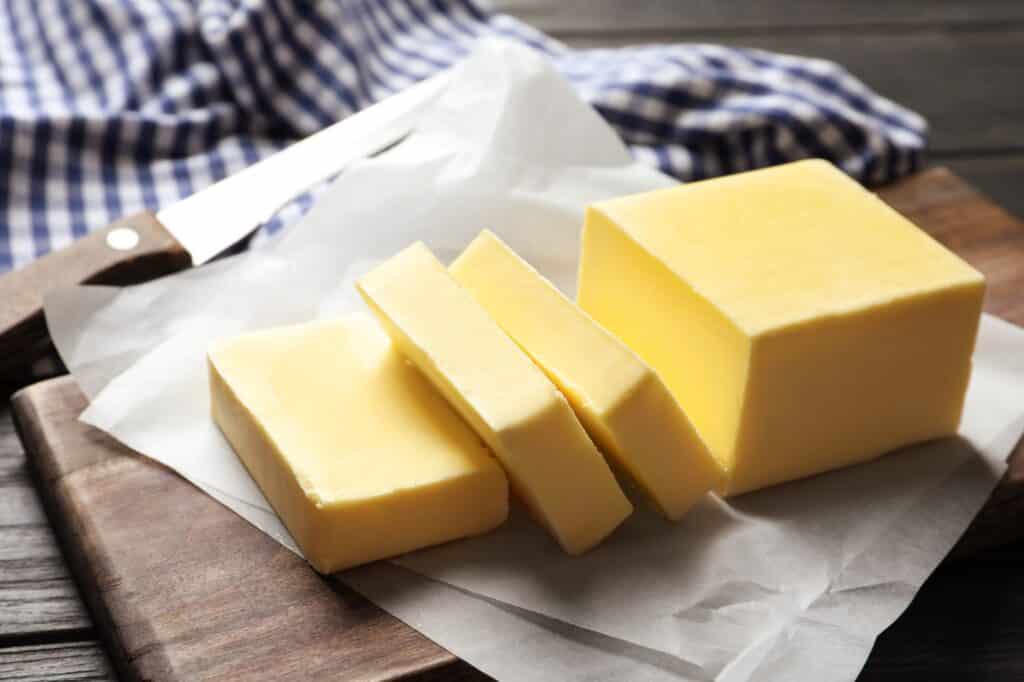 Butter has a long history going back thousands of years according to the most popular theory of its origin. Supposedly, a traveler in Africa around 8000 BCE placed milk into a sheepskin bag that he carried on his pack animal. Opening it one day, the traveler discovered that the milk had been churned by the animal’s movement and was now butter.

People eventually began churning their milk in pouches that they hung from tree limbs. This method of making butter is still used in some parts of the Middle East. In India, ghee — which is clarified butter — has been in use for about 3,000 years. The earliest form of butter came from yaks, sheep, and goats rather than cows.

Ancient Sumerians used butter as religious offerings. The Ancient Greeks and Romans were not particularly fond of butter. The Romans used it as a kind of salve or unguent rather than as food. Their preferred fat was olive oil rather than butter, which they associated with barbarians from the north. The warm climate may have had something to do with the Mediterranean distaste for it as butter went bad faster in the warm weather than it did in the colder parts of Europe.

In the 12th century, butter was extremely popular all over Northern Europe. It was a major part of the Scandinavian economy, so much so that a bucket was paid every year to the Norwegian king as tax. Butter was popular both with peasants and the nobility.

The northern European love for butter made its way to the Americas via the Pilgrims who brought barrels of it on their voyage. Over the following centuries, butter would become one of the main products of the American farm.

Demand for the fat was so high that Napoleon commissioned research into a substitute. As a result, margarine — then called oleomargarine — was invented in 1869.

Butter consumption dipped during the great depression and World War II, which brought margarine back as a cheaper option for people dealing with rationing and shortages. Butter fell further out of favor in the 1980s and 90s due to health concerns.

Butter has made a comeback recently. These days, Americans consume almost 950,000 metric tons of it annually and the demand is increasing.

Butter’s flavor is typically described as rich, creamy, and milky. If it has been clarified it will also have a caramel note.

While not regarded as a healthy food item, butter does have some positive effects on health because it contains compounds like:

Consuming butter may help to treat or prevent health conditions like:

Butter is mostly fat and is a high-calorie food, which means that it contributes to obesity. Most of its fat is saturated, so it may also contribute to high cholesterol levels and increase heart disease risk.

Butter is best known as a spread for bread but is also a popular cooking and baking fat.