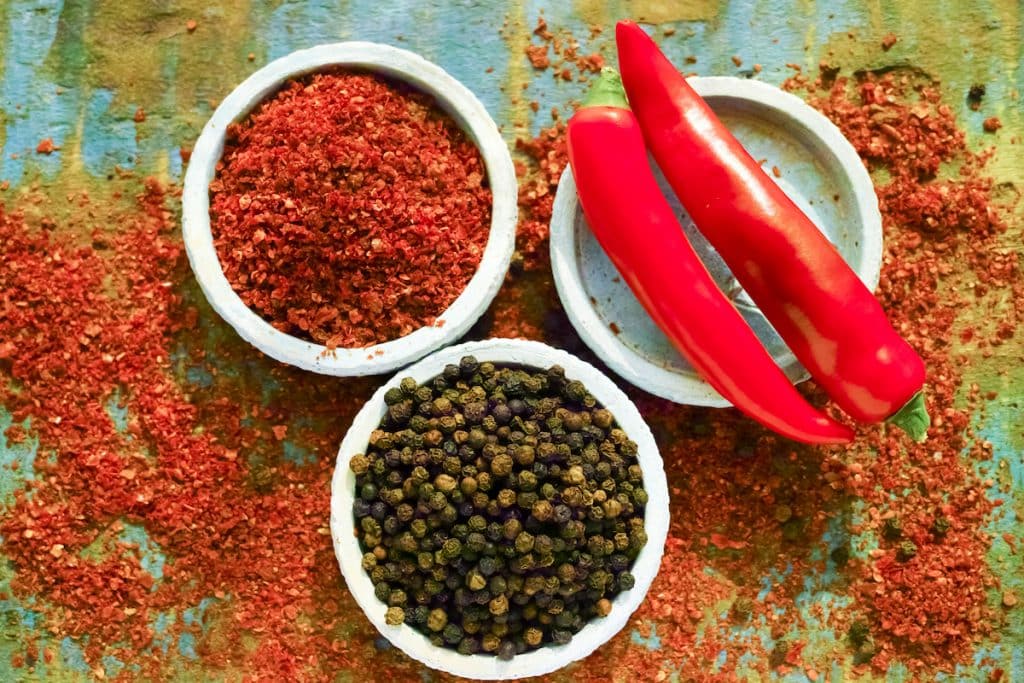 Black pepper and cayenne pepper both have pepper in their names implying similarity. While they have one common factor, they are two very different spices. They each have their own unique qualities and as a result, some recipes may require you to use both. If you are trying to choose between one and the other, you will need to know what each brings to the table. Consider the black pepper vs. cayenne pepper comparison in another Spiceography Showdown.

How does black pepper differ from cayenne pepper?

Chili peppers get their heat from another compound called capsaicin. The heat from piperine is much milder than the heat from chili peppers and does not linger for as long. The exterior of black peppercorns is mostly black, while the interior is an off-white. The result of the whole peppercorns being ground is that black pepper has a mottled black and off-white appearance, which differs from the red color of cayenne pepper.

Cayenne pepper refers to the fruit of the Capsicum anuum. This fruit is usually dried and ground to a powder that may be referred to as cayenne powder or more commonly as cayenne pepper. The Scoville scale is a system for measuring the heat of chili peppers like cayenne peppers. According to this scale, cayenne pepper is moderately hot with a heat rating of 30,000 to 50,000 Scoville heat units.

Can black pepper and cayenne pepper serve as substitutes for each other?

Given that the main functions of both black pepper and cayenne pepper involve providing heat, both can serve as effective replacements for each other; however, they are not equally effective in this respect. The difference in heat and appearance means that you may have to be careful about which dishes you use them in when making a substitution. Consider the fact that because black pepper is milder, you will have to use more of it when replacing cayenne pepper.

Use black pepper as an all-purpose seasoning for savory dishes. Its woodsy, piney notes allow it to work well in meat-based dishes as well as with many vegetables. Its gentle heat makes it ideal for providing a spicy touch in European-style dishes that are supposed to have relatively subtle flavors.

Cayenne pepper is effective for providing a more aggressive heat and a red color if you add enough of it. Add it to dishes like chili or to some curries if you want to increase the heat. Its powdered form makes it easy to control the level of heat. You can also use it in small amounts if you want a low level of heat without the black specks of ground peppercorns.