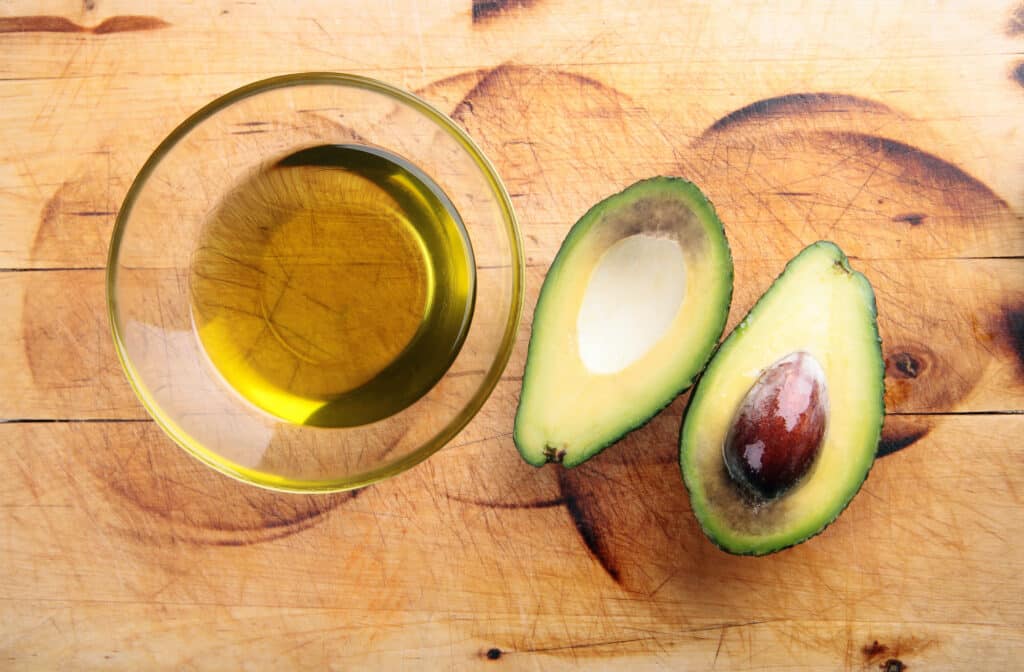 Avocado oil is a relatively new phenomenon when it comes to culinary oils. It has become a trendy oil because of a unique set of properties such as its high smoke point — the temperature at which it begins smoking — and some important nutritional benefits such as its oleic acid content. Avocado oil has a mild, grassy avocado flavor with hints of nuttiness that makes it a good option for salad dressings as well as for cooking.

The downside with avocado oil is that it is not always easy to find and is likely to be expensive when it is available. If your recipe calls for it and you don’t have any in your kitchen, consider one of the avocado oil substitutes below.

You can use olive oil in most of the applications that call for avocado oil. For starters, both have high smoke points. Avocado oil’s smoke point is 520 degrees Fahrenheit. Extra light olive oil’s smoke point 468, which is good enough to give you similar results when cooking at high temperatures.

Another important similarity is flavor. Extra light olive oil’s flavor is close to neutral, just like avocado oil’s flavor. Switching one for the other won’t dramatically alter the flavor profile of a dish. Note that extra light olive oil is a different product from extra virgin olive oil, which has a lower smoke point and a stronger flavor.

Nutritionally speaking, extra light olive oil has a lot in common with avocado oil. Both oils consist mostly of monounsaturated fats. They also contain significant amounts of vitamin E, which is an important antioxidant. They are similar enough that some producers make them using the same facilities.

Because of its high smoke point, peanut oil is a great alternative to avocado oil for cooking. Refined peanut oil is the kind that most people use for cooking and has a very mild, nutty flavor that works particularly well with Asian dishes. It is more commonly used for stir-frying and deep-frying but it can work in uncooked applications like salad dressings. The process of refining peanut oil removes its allergens so peanut oil is actually safe for people with peanut allergies.

One of the things that make peanut oil unique among cooking oils is the fact that it maintains its neutral flavor even after food has been cooked in it. As a result, you can use it multiple times without your food taking on unwanted flavors.

Peanut oil has a higher percentage of saturated fat when compared to other vegetable oils, but a lower one than coconut oil.

In a pinch: Grapeseed oil

If you need oil for high-heat cooking, grapeseed oil is a good option. It has a lower smoke point than avocado oil — 420 degrees Fahrenheit — but is still a useful oil for searing and stir-frying. Also, it has a neutral flavor that won’t overwhelm mildly flavored dishes.

Grapeseed oil has a different nutritional profile than avocado oil with a much lower level of monounsaturated fat, but it is still a healthy cooking oil. It is a good source of linoleic acid, which makes it healthier for you than saturated fats and trans fats.

Ghee is clarified butter that is heat stable because its milk solids have been removed. The remaining butterfat has a rich, nutty flavor with similar buttery properties to those of avocado oil.