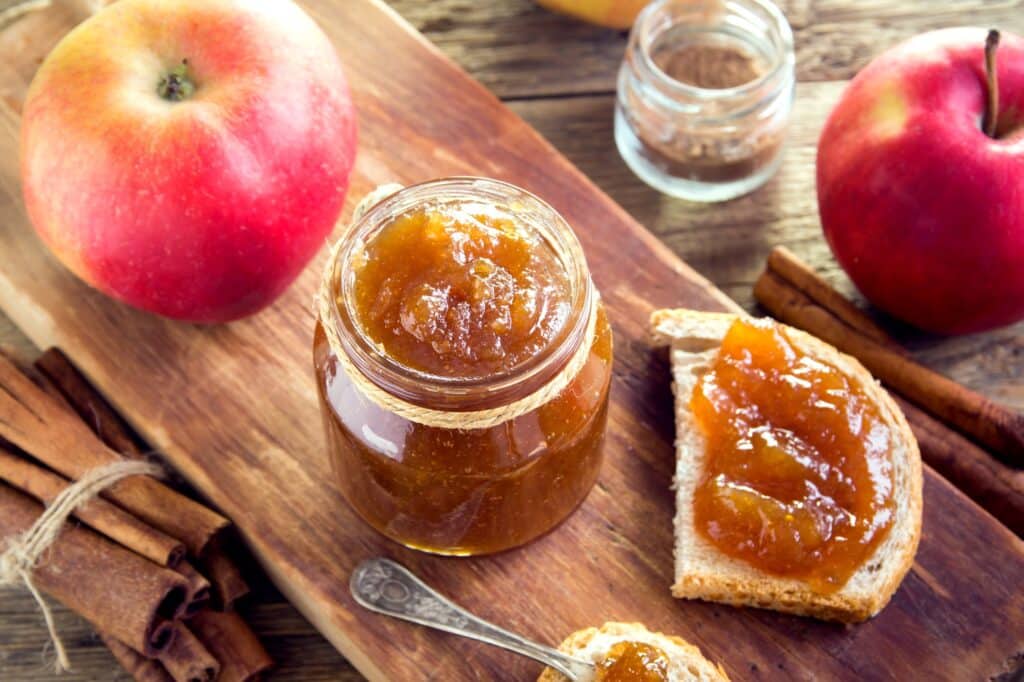 Apple butter’s main ingredient is cooked and puréed apples. In some parts of Europe, the term apple butter is used for a syrup made from reduced apple juice. While apple butter is associated primarily with the US — colonial America, in particular — its history goes back to Europe. It is an invention from the Middle Ages. It comes from Limburg, which is now known as Belgium as well as the Netherlands and Germany.

Apple butter’s history is tied to European monasteries in the Middle Ages. The monasteries had large orchards that produced lots of fruit. Apple butter originated as a way to preserve apples.

In the Netherlands, apple butter is called apple syrup or appelstroop.

Apple butter contains no dairy butter. It gets its name from the fact that it has a spreadable consistency similar to that of butter. It can also be called apple jam.

You won’t get much of your daily nutrition from apple butter since a serving contains only trace amounts of any vitamins, but it does contain some important compounds like:

With apple butter in your diet, you may get a little help when it comes to treating or preventing health problems like:

Apple butter gets most of its calories from the sugar it contains. There is natural fruit sugar in the apples, and most apple butter recipes call for added sugar. Consuming too much sugar will increase weight gain and can contribute to type 2 diabetes.

Aside from its main use as a spread for bread, you can use apple butter just as you would use jam or syrup. The Dutch and Germans traditionally serve apple butter on bread with cheese. It works well as a topping for muffins, waffles, and pancakes. Apple butter is used in savory preparations as well. You can use it to make a glaze for pork or chicken.